Officially, the UFC has five title fights on its upcoming schedule — four of them featuring a fighter coming off a loss in his most recent fight.

Now, the four matchups are easy to explain. Heavyweight Daniel Cormier lost to Stipe Miocic last year, and the two need to finish their rivalry. Featherweight Max Holloway deserves an immediate rematch against Alexander Volkanovski after years of dominance. Bantamweight Jose Aldo lost his last bout via split decision, which UFC officials thought he actually should have won. And flyweight Joseph Benavidez is fighting Deiveson Figueiredo a second consecutive time, after their first meeting ended in some controversy over a headbutt.

Saturday’s UFC Fight Night main event features sizzling heavyweights Curtis Blaydes and Alexander Volkov, who have each won seven of their past eight fights. In the co-main event, featherweights Josh Emmett (15-2) and Shane Burgos (13-1) are set to square off.

Fighting out of Denver, Blaydes will be seeking his ninth win in 11 appearances in the UFC. His resume includes finishes over Junior dos Santos, Alistair Overeem and Mark Hunt. And while upsets happen all the time in MMA, it’s worth noting that Blaydes is a heavy betting favorite to prevail on Saturday.

And yet, it is very difficult to say how close he is to getting a UFC title shot. His only two professional losses have come at the hands of one man, Francis Ngannou, who happens to be ranked above him. Both fights, Blaydes lost via stoppage, including a 45-second knockout in November 2018.

A win on Saturday should, in theory, cement a future title shot for Blaydes. And if he were to choose to sit back and wait for it, he would be well within his rights. But with Ngannou waiting in line ahead of him, and light heavyweight champion Jon Jones constantly teasing a move up to heavyweight (should he and the UFC comes to financial terms on such a move), it’s impossible to predict how long Blaydes might have to wait.

For Blaydes, it’s not the most pleasant backdrop for a UFC main event, but it’s his reality at the moment. And if he wins on Saturday, which he needs to do, he might face it again.

45: Takedowns landed in the UFC by Blaydes, the most in promotion history. His 55.6% accuracy on takedown attempts is the second highest ever. He averages 6.6 takedowns per 15 minutes; the UFC average is 1.9.

53:36: Total control time by Blaydes, in minutes and seconds. It is the most among active UFC heavyweights, as is his control time percentage (52.8%).

82.8%: Percentage of takedown attempts successfully defended by Volkov, the best in UFC heavyweight history. He’ll need this to be on point on Saturday.

6.19: Strikes landed per minute by Volkov in the UFC, the second most in promotion history, behind Cain Velasquez‘s 6.48. Volkov’s strike differential (3.42) also puts him second only to Velasquez (4.08).

0: Career losses by Blaydes to someone not named Francis Ngannou. Blaydes has been knocked out twice by “The Predator.” 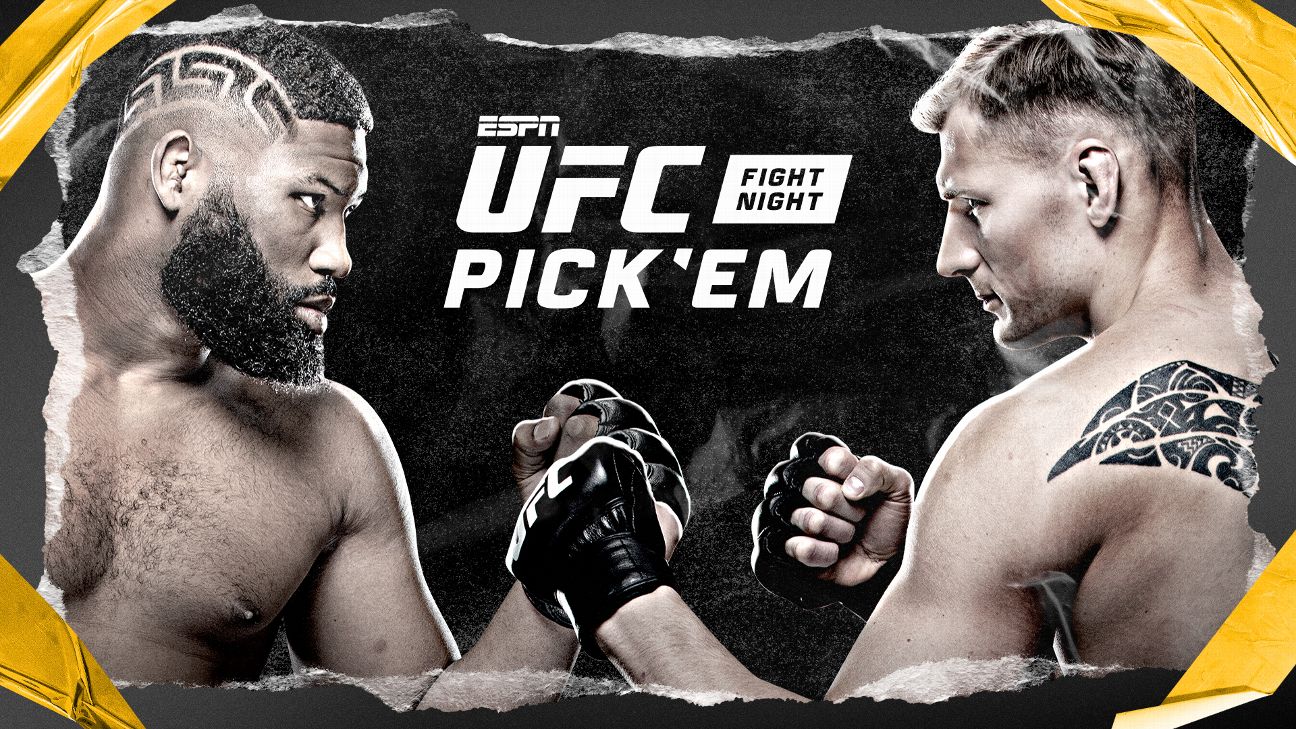 Make your picks and compete against friends! Watch the action LIVE on June 20 on ESPN and ESPN+. Make Your Picks

All Blaydes. That’s the popular opinion, and I’d love to go against the grain, but I just don’t see it. Especially in a small Octagon, with less room for Volkov to hide from Blaydes’ forward pressure and relentless takedown ability. This is about as bad of a matchup for Volkov as you can draw up on paper. It’s a heavyweight fight, so anything can happen. But that’s about the only thing you can say in Volkov’s favor. Blaydes, second-round TKO.

What else to look for … beyond the main event

The co-main event promises to be a hit show

Monday through Friday, host Mina Kimes brings you an inside look at the most interesting stories at ESPN, as told by the top reporters and insiders on the planet. Listen

Josh Emmett and Shane Burgos meet in the co-main event, and they have two things in common: They win a lot, and they hit a lot.

Emmett (15-2, 6-2 in the UFC) has won two in a row, both by knockout. He averages 2.68 knockdowns per 15 minutes, the most in UFC men’s featherweight history, and is tied for the second-most knockdowns landed (eight).

Burgos (13-1, 6-1 UFC) is featured on both lists as well, slotting in fifth for knockdowns per 15 minutes (1.07) and tied for fifth in knockdowns landed (six). He has won his past three fights.

The couple that fights together …

When Tecia Torres steps into the cage to face Brianna Van Buren in a strawweight prelim, Torres’ wife, Raquel Pennington, will be watching on TV in their hotel room.

Then, as soon as the bout is over, Pennington will leave for the UFC Apex. She will have her turn in the cage four fights later, taking on bantamweight Marion Reneau.

“I have been trying to convince Tecia for years now to get on the same card as me,” Pennington told reporters Thursday, “and she’s like, ‘No, I can’t do it.’ She’s more emotional than I am, so for her it’s just more stressful.”

It is rare for both halves of a couple to compete on a fight card, but it’s not a first for these two women. In 2012, Pennington and Torres met while competing at the same Invicta FC event. They also both fought on a UFC card in 2016.

That shared history helped persuade Torres to give it a go this weekend. “She was like, ‘Oh, we can go every four years now,'” Pennington said.

What will make this unusual couple’s outing work for both parties, Pennington believes, is that Torres is fighting before her, not after. “She’s super emotional,” Pennington said. “She won’t have to stress about me until after she’s done.”

2. Marion Reneau is the oldest fighter on Saturday’s card and will be competing on her 43rd birthday. Her bantamweight opponent has a deceptive record. Raquel Pennington is 7-5 in the UFC, but all five of her losses have come against former champions (Jessica Andrade, Germaine de Randamie, Amanda Nunes, Holly Holm twice). Pennington will break a tie with Nunes for the most fights in division history with her 13th bout at 135 pounds.

3. Jim Miller will be making his 35th UFC appearance, tying Donald Cerrone for the most fights in promotion history. If Miller wins his catchweight bout (160 pounds) against Roosevelt Roberts, it would be his 21st victory in the UFC, breaking a four-way tie for the third most ever. Miller also owns the UFC record for submission attempts (42) and is tied for the third-most submission wins (nine).

4. Roxanne Modafferi, who faces Lauren Murphy in a women’s flyweight prelim, will tie Katlyn Chookagian for the most fights (seven) in the division’s history. A win would place her in a five-way tie for the third most among 125-pounders (with four).

Tokyo Olympics an opportunity to bring world together: LA 2028 chief

Lakers’ LeBron James partners on ‘More Than a Vote’ to energize, inform voters

Should LeBron James lead the Los Angeles Lakers to the NBA Finals, he’ll be playing basketball in October. However, there’s something even bigger that the Lakers’ star — and some of his friends and colleagues in the sports and entertainment world — are preparing for come November, James announced Wednesday. James and a collection of […]

8:59 AM ET Steve KimESPN Boxers are always thinking about fighting, whether it’s the previous bout or the next one. Those who step into the ring rarely get the chance to take a step back and understand all they’ve been through. However, with the sport on hold, many world-class fighters have had a chance to […]