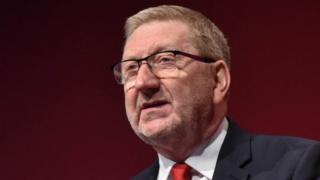 Labour’s largest trade union backer has promised to review its financial support after the party decided to pay off former staff who sued it in an anti-Semitism row.

Unite leader Len McCluskey told the Observer that Labour should not be “taking Unite’s money for granted”.

The party agreed last month to a “substantial” payout to seven whistleblowers who spoke to the BBC.

In a July 2019 BBC Panorama programme, entitled Is Labour Anti-Semitic?, a number of former party officials alleged that senior figures close to the leadership at the time had interfered in the process of dealing with anti-Semitism complaints.

They also claimed they had faced a huge increase in complaints since Mr Corbyn’s election as leader in 2015.

A party statement at the time denounced them as “disaffected former staff” who had “personal and political axes” to grind and accused them of trying to undermine Mr Corbyn – who was replaced as leader by Sir Keir Starmer in April this year.

Seven of the whistleblowers took legal action and, in a statement read out in the High Court last month, Labour unreservedly apologised, saying it was determined to root out anti-Semitism in the party and the wider movement.

It admitted its earlier press statement had “contained defamatory and false allegations about these whistleblowers”.

Mr McCluskey, a supporter of Mr Corbyn, has criticised the accompanying payout, telling the Observer: “It’s an abuse of members’ money. A lot of it is Unite’s money and I’m already being asked all kinds of questions by my executive.

“It’s as though a huge sign has been put up outside the Labour Party with ‘Queue here with your writ and get your payment over there’.”

He said there was “no doubt” the union’s executive would demand a review of its funding of Labour.

Unite gave £401,875 to the party in the first three months of this year and has donated several million pounds over recent years.

After the whistleblowers’ settlement, Mr Corbyn described the party’s response as “disappointing”, adding that the legal advice had been that Labour “had a strong defence”.

But Labour’s deputy leader Angela Rayner said it was a “prudent move” which was “part of that healing process” that the party needed.

The Labour Party has been contacted for a response to Mr McCluskey’s comments.

Coronavirus: No deaths reported in NI in last 24 hours

Image copyright Reuters There have been no Covid-19 related deaths reported by Northern Ireland’s Department of Health in the past 24 hours. It is the first day since 18 March – almost 10 weeks ago – that no deaths have been reported in Northern Ireland. The latest figures from the department state the total number […]

Image copyright AFP Image caption MPs voted in June to set up an independent panel to examine bullying allegations against them. MPs could be banned from foreign trips or made to take anger management classes under a proposed revamp of Parliament’s sanctions regime. The Commons Committee on Standards said a wider range of penalties was […]

Coronavirus: When will pubs, bars, cafes and restaurants reopen?

Image copyright Getty Images Pubs, bars, cafes and restaurants in England may soon be able to reopen their doors for the first time since lockdown began in March. But despite the easing of restrictions, a trip to a local bar or dining establishment could be a very different experience from how it was before coronavirus. […]