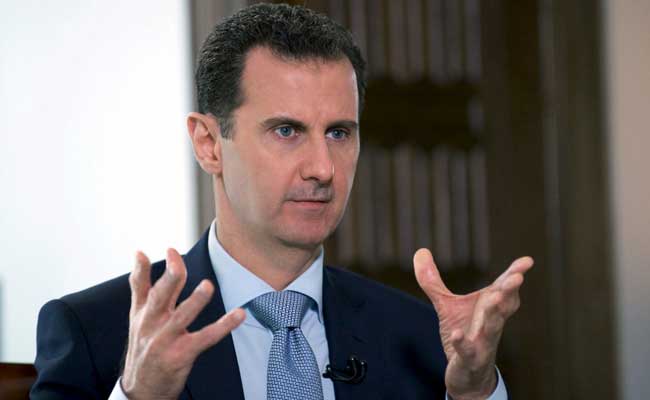 Will continue to hold Bashar al-Assad (above), his regime accountable for their atrocities: Mike Pompeo

The United States on Wednesday slapped sanctions on the son of Syrian President Bashar al-Assad, extending efforts to block funds for the war-torn country’s regime.

Hafez al-Assad, 18, named after his grandfather, will not be allowed to travel or maintain assets in the United States, the State Department said.

The designation was part of a second set of sanctions under the Caesar Act, a US law that took effect in June that aims never to normalize the Assad regime even as it succeeds in winning back most of Syria after a brutal nine-year war.

“We will continue to hold Bashar al-Assad and his regime accountable for their atrocities, while keeping the memory of their victims alive,” Secretary of State Mike Pompeo said in a statement.

“It is time for Assad’s needless, brutal war to end,” he said.

Also hit by the new sanctions is the Syrian businessman Wassim Anwar al-Qattan, who is involved in major construction projects in Damascus

The United States, however, has not yet targeted business interests from Assad’s key ally Russia. Fears of action against foreign investors under the Caesar Act have wreaked havoc on Syria’s war-ravaged economy by clouding hopes for reconstruction.

The United States has already imposed sanctions on Bashar al-Assad and his wife Asma.

A senior US official said the sanctions against their only adult child was meant to stop Hafez from becoming a conduit for his family overseas.

“It’s also because we have seen a rise in his prominence within the family,” the official told reporters on condition of anonymity.

“Adult children are essentially continuing to conduct business in the name and on behalf of their sanctioned parents or other adult relatives,” he said.

The young Hafez al-Assad has mostly made headlines for his passion for math, taking part in international competitions in Brazil and Romania.

Coronavirus Vaccine Could Be Ready By Year-End: China

COVID-19 Updates: US coronavirus deaths now exceed the number of Americans killed in the Korean War The number of deaths in the US from the novel coronavirus reached 50,000 on Friday, having doubled in 10 days, according to a Reuters tally. More than 8,75,000 Americans have contracted the highly contagious respiratory illness COVID-19 caused by […]

Spain’s Coronavirus Deaths Could Be 60% Higher Than Official Data: Report

Spain’s official data didn’t include suspected cases who were not tested (Representational) Madrid: Spain’s COVID-19 death count could be nearly 60% higher than the official figure of 28,432, according to an investigation by El Pais newspaper published on Sunday. The country’s official death count includes only people who were formally diagnosed with the novel coronavirus, […]