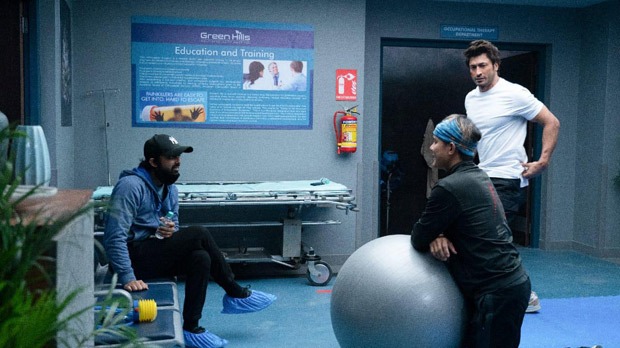 With barriers to film production brought in by the pandemic, filmmakers are coping up with new challenges to shoot their respective projects, considering social distancing and safety protocols. Shooting action films have certainly become more challenging during the pandemic time, as it involves more manpower and extra safety precautionary measures. Vipul Amrutlal Shah’s Sanak stars Vidyut Jammwal and is directed by Kanishk Varma.

Talking about the magnitude of action sequences and scale, director Kanishk Varma informs, “While the audience has seen and enjoyed some of Vidyut’s signature action moves in films over the years, they will get to see a different side of him in Sanak. We have mostly seen Vidyut portraying a Commando or Special Force guy in movies so far, but in Sanak he plays a common man and he has a past which is related to Mixed Martial Arts in the movie. How he fights as a common man, sets the action tone for the film.”

“The movie features a very different style of action. It’s like balletic action, having a certain rhythm to it. With Vidyut, it becomes easy to shoot because he is such a brilliant martial artist in his own right that he just needs to remember the action choreography. My brief to Andy Long (Hollywood stunt choreographer) was that the action should look like a ballet. We wanted to shoot long takes and that’s where I think the audience will get a glimpse of action the film has,” Kanishk adds.

Vidyut Jammwal shares, “Sanak is about a common man’s emotional journey and the action sequences have been choreographed and tailored accordingly. It was a conscious decision to create our own niche using Kalaripayattu as the background of an MMA fighter. The action in the film is new, original, and path-breaking. It will certainly inspire action junkies all over the world. The fans of the action genre will enjoy watching the sequences as much as I did performing them.”

Producer Vipul Shah, who has collaborated with Vidyut for the fifth time, reveals, “With every film, we are trying to create a new style of action with Vidyut and that’s what he has cracked again with Andy Long, who has worked extensively with superstars like Jackie Chan and others. We have created different sets for different action sequences. While every action scene is set within the premise of a hospital, it will still look different since every section is different. That’s how it has become a very unique experience to shoot the action scenes in Sanak.”

Starring Vidyut Jammwal and debutant actress Rukmini Maitra, the movie also features Neha Dhupia in a special performance along with Chandan Roy Sanyal in a pivotal role. Presented by Zee Studios in association with Sunshine Pictures, Sanak is a Vipul Amrutlal Shah production, being directed by Kanishk Varma.

DRIVE has now finally got a release, that too on an OTT platform. As a result, there’s a lot of negativity surrounding the film. So is DRIVE really as disappointing as believed? Or does it turn out to be a fine entertainer? Let’s analyse. DRIVE is the story of a group of thieves planning the […]

Actor Olivia Wilde is set for her next directorial venture. She will helm psychological thriller Don’t Worry, Darling which will star Black Widow‘s Florence Pugh and Wonder Woman star Chris Pine. Joining the cast is Dunkirk star, Harry Styles. Harry Styles has replaced Shia LaBeouf, who left the project due to scheduling conflicts. According to […]