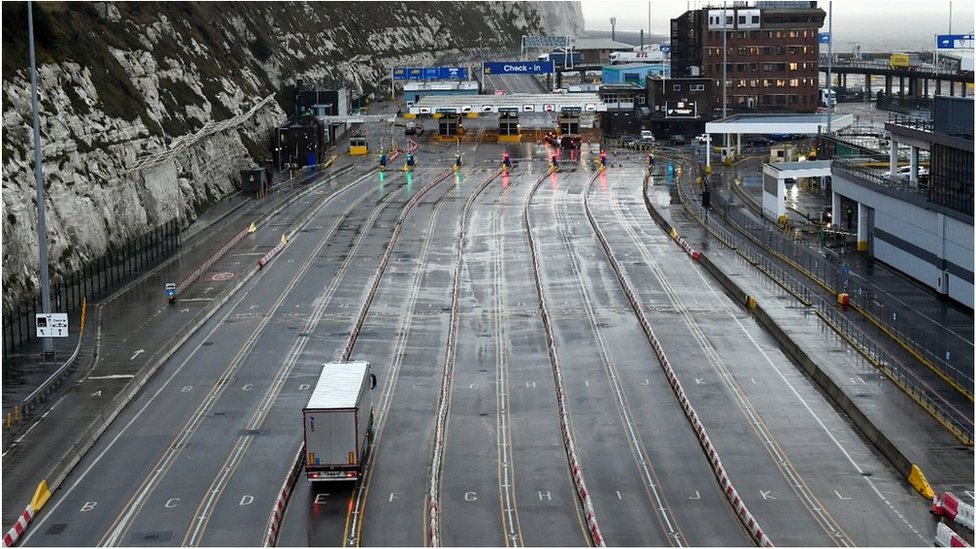 It’s been a week since the UK ended its transition period and completed its separation from the European Union.

British companies found themselves having to fill out customs forms to export to European countries, but we have not seen big queues on motorways in Kent that some feared.

View from the scene

In many ways, it’s been business as usual at the Port of Dover and Eurotunnel. A steady stream of lorries has been boarding ferries and trains to France.

But the new year has also brought new checks for hauliers. Predictions of gridlock in Kent have failed to materialise, but traffic is still exceptionally low – probably down to stockpiling in the run up to Christmas.

As more hauliers return to the roads, the new system will face sterner tests – particularly as Covid testing for anyone wanting to travel to France is set to continue for at least another couple of weeks.

On Monday morning, the Department for Transport said only about 1% of lorries had been turning up without the right customs paperwork with another 3% being sent to Manston for testing because of not having the necessary Covid result. It has not updated those figures since.

But on Thursday, the Road Haulage Association (RHA) told BBC News that about one in five trucks were being turned away for both reasons.

It estimated that there were about 2,000 lorries a day in each direction making the Dover-Calais ferry crossing and going through the Channel Tunnel compared with a normal daily figure of between 5,000-6,000.

John Glen, chief economist for the Chartered Institute of Personnel and Supply, told BBC News he had heard from customs clearance agents working in Dover that there was a lack of preparation from businesses and a lack of capacity from the customs brokers that businesses have been employing to help.

That is expected to improve over time, but people involved “are worried that demand will increase faster than capacity does”, he said.

The boss of Sainsbury’s also said that while the flow of goods had been going well so far the real test would be in a few weeks when there were normal levels of traffic.

John Glen added that many of the problems before Christmas had been because ports such as Felixstowe and Southampton had been log-jammed, partly because dock staff had been off sick. That meant ships had been avoiding UK ports and dropping containers off in Antwerp or Zeebrugge instead, leaving them to be transported by road, which increased the problems for roll-on roll-off ports such as Dover.

There have been reports of other issues in the first week:

Soon after telling MPs about plans to cut VAT on hospitality to limit job losses, Rishi Sunak was serving meals in a London restaurant. The BBC’s Vicki Young explained the measures the chancellor hopes will limit job losses by encouraging people to go out and eat in venues. Source link 60 SHARES Share on Facebook […]

Prof Jonathan Van-Tam, England’s deputy chief medical officer, said: “Given the inevitable challenges of immunising large numbers of the population against Covid-19 and potential global supply constraints, there are definite advantages to having data that could support a more flexible immunisation programme, if needed and if approved by the medicines regulator. Source link 60 SHARES […]