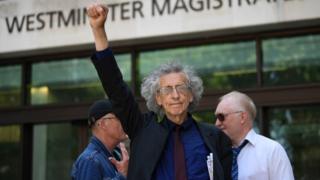 The brother of former Labour leader Jeremy Corbyn is to go on trial for attending two mass protests in central London during the lockdown.

The 73-year-old, of Southwark, has acknowledged he joined two protests in Hyde Park on 16 and 30 May, but claims he was exercising freedom of expression and his right to protest.

He will go on trial on 23 October.

Mr Corbyn has been charged with two counts of participating in a gathering in public of more than two people in England during the coronavirus emergency period.

Following the hearing, the 73-year-old was released on unconditional bail.

Image copyright PA Media Entering Parliament amid Extinction Rebellion protests was like “entering the Glastonbury Festival”, a Conservative MP has said. Sir David Amess said it was “absolutely ridiculous” to allow the noise and disruption in Parliament Square. A protest by the group, on the square opposite the Palace of Westminster, is in its second […]