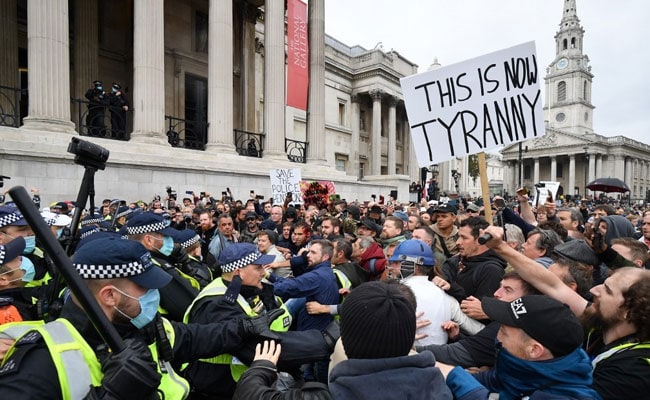 London police said they arrested 10 people as they broke up a thousands-strong demonstration.

London police said they arrested 10 people and four officers were injured as they broke up a thousands-strong demonstration against British coronavirus restrictions Saturday.

Skirmishes broke out as officers moved in with batons to disperse the more than 10,000 protesters gathered on central Trafalgar Square, who were not sticking to infection control measures, the Metropolitan Police said on Twitter.

“Sadly, four of our officers have been injured, two require hospital treatment,” the Met wrote.

A dozen officers were injured in a similar protest last week.

Among the Saturday crowd was David Icke, a prominent conspiracy theorist who has drawn attention in the past by suggesting the world is secretly governed by reptilian humanoids, including the British royal family.

Some people in the crowd carried signs opposing any potential vaccine against the coronavirus.

Local infection control restrictions now extend to one in four people in Britain in an attempt to contain a mounting second wave of the virus, which has claimed 42,000 lives in the country so far — Europe’s highest toll.

This week, Johnson’s government imposed a ban on gatherings of more than six people and ordered pubs and restaurants to close at 10:00 pm in a bid to slow the spread.

Imge use for representative purpose AMSTERDAM: A statue of Mahatma Gandhi has been vandalised here in the capital of Netherlands by unknown miscreants with graffiti and spray painting, amid a wave of attacks on controversial figures following the protests around the world after the custodial killing of African-American George Floyd, according to media reports. The […]

PARIS: Hospitals in Paris could have up to 90 percent of intensive care beds packed with Covid-19 patients as soon as next week, the system’s chief warned Tuesday, as France braces for new measures to slow a surge in cases. “It’s inevitable,” Martin Hirsch, the head of the 39 hospitals in Paris and its suburbs, […]

BERLIN — Twenty-nine German police officers have been suspended from duty on suspicion of sharing images of Adolf Hitler and violent neo-Nazi propaganda in at least five online chat groups, German authorities said on Wednesday, the latest in a series of cases of far-right infiltration in Germany’s police and military. Herbert Reul, the interior minister […]