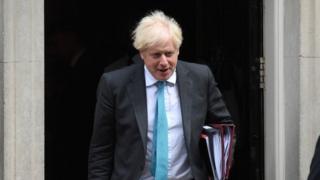 Boris Johnson has reached a deal with potential Tory rebels over a bill to rewrite the EU withdrawal agreement, the BBC understands,

More than 30 Tory MPs were expected to vote for an amendment to the Internal Market Bill next week.

If passed, Sir Bob Neill’s amendment would have given MPs the final say over changes to the withdrawal agreement.

The PM has now promised to give MPs “give an extra layer of parliamentary oversight” it is understood.

BBC Political Editor Laura Kuenssberg said the hope from ministers is that this will “prevent rebellion next week”.

Image copyright Reuters The UK is to give £500m to a new global vaccine-sharing scheme designed to ensure treatments for Covid-19 are distributed fairly. Prime Minister Boris Johnson will make the announcement in a speech to the United Nations general assembly. He will call on world leaders to overcome their differences as he sets out […]

Coronavirus: PM says Covid ‘complacency could be our undoing’

Prime Minister Boris Johnson has said the threat from coronavirus has not faded and that “complacency could be our undoing”. Speaking in the House of Commons, he announced new restrictions in England including the closing of hospitality businesses at 22:00 BST and a reduced number of people allowed at weddings. He told MPs these were […]