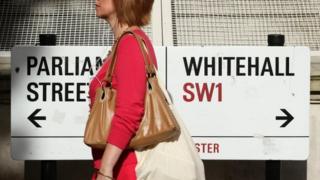 Junior civil servants asked to work on Brexit policy that they fear might break the law, have been advised to inform their managers, BBC Newsnight has learned.

The email advice – from senior civil servants in a major government department – sets out what staff should do if they are asked to work on a policy which might be “inappropriate”.

It follows the publication of the Internal Market Bill, which ministers accept contains provisions which would break international law as agreed between the UK and EU,

One departmental e-mail is explicit that it is being sent following “the government’s announcement that it would break international law”- the e-mail advises officials that if they should feel uncomfortable about what they are being asked to do, they must raise it with their superiors.

Northern Ireland Secretary Brandon Lewis last week confirmed to the House of Commons that should the full provisions of the bill be enacted, it would break the commitments the government made as part of the treaty it signed with the EU and therefore, would run counter to international law “in a very specific and limited way”.

However, civil servants’ conduct is governed by the civil service code, which makes clear that civil servants must “comply with the law and uphold the administration of justice”.

This has led to some disquiet within elements of the service that they may be asked to enact policies which run counter to their own code of behaviour.

The emails seen by Newsnight encourage staff to reacquaint themselves with the code and says that if they are concerned they are “being asked to do something inappropriate by a fellow civil servant or a minister you should raise it with your line manager immediately”.

It is a very unusual move for senior civil servants to advise their colleagues to potentially refuse ministerial instruction.

It potentially raises the prospect of renewed tension between ministers and the service as the Brexit process continues.

PMQs: Davey and Johnson on help for disabled children

The leader of the Liberal Democrats has asked to meet with the prime minister to “protect the rights to care of disabled people”. Sir Ed Davey, who has a disabled son, asked the prime minister about legal advice he had seen which suggested international law was broken in how the Coronavirus Act reduced the rights […]

Alex Salmond ‘could go to court’ over inquiry papers

Image copyright PA Media Image caption Mr Salmond has previously won a legal battle against the Scottish government and been cleared of all charges by a criminal court Alex Salmond could go to court to force the release of documents to a Holyrood inquiry into the Scottish government’s investigation of him. MSPs are holding an […]