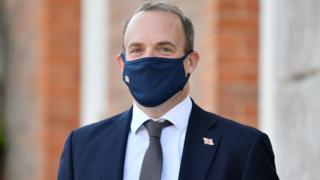 Foreign Secretary Dominic Raab is in Washington where he is expected to try to reassure US politicians about the latest Brexit twist.

Some US politicians are concerned about the UK government’s plan to override parts of the Brexit divorce deal.

Mr Raab will meet US Speaker Nancy Pelosi, who last week said there would be no UK-US trade deal if the Northern Ireland peace agreement was undermined.

No 10 has said the peace agreement will be upheld in all circumstances.

Mr Raab is due to meet leading politicians including his US counterpart, Mike Pompeo, as well as Democratic Congresswoman Ms Pelosi, who is speaker of the House of Representatives.

Brexit is expected to be high on the agenda at the Washington meetings.

Earlier this week, a proposed law that would give the UK government the power to override part of the Brexit withdrawal deal – which Prime Minister Boris Johnson agreed with the EU last October – cleared its first hurdle.

It now faces further scrutiny and also needs to be passed by the House of Lords.

If the law comes into force, it would breach international law – a prospect that prompted an angry response from senior figures in the US last week.

Ms Pelosi said if the UK broke international law and Brexit undermined the Good Friday Agreement – the NI peace deal – there would be “absolutely no chance of a US-UK trade agreement passing the Congress”.

Then on Tuesday, four senior congressmen also issued a similar warning, saying a UK-US trade deal would be blocked if the UK failed to preserve the gains of the Good Friday Agreement.

In a letter to Mr Johnson, the four congressmen said the plans to change the part of the Brexit deal on Northern Ireland (known as the Northern Ireland Protocol) could have “disastrous consequences for the Good Friday Agreement and broader process to maintain peace on the island of Ireland”.

“We therefore urge you to abandon any and all legally questionable and unfair efforts to flout the Northern Ireland protocol of the withdrawal agreement and look to ensure that Brexit negotiations do not undermine the decades of progress to bring peace to Northern Ireland,” the letter added.

No 10 responded to the letter, saying it was taking these steps to make sure the Good Friday Agreement “is upheld in all circumstances and harmful defaults do not inadvertently come into play which could jeopardise the huge gains of the peace process”.

“We are absolutely committed to no hard border and no border infrastructure between the Republic of Ireland and N Ireland. This is about a legal safety net and not having east-west checks suddenly imposed which run directly counter to Belfast (Good Friday) Agreement.”

The No 10 spokesperson added: “We will continue to engage with our US partners on a bipartisan basis to ensure that our positions are understood and to ensure we agree a trade deal with widespread support in the US.”

In his talks on Wednesday, Mr Raab is expected to argue that the government’s plans are precautionary and proportionate – and a response to what ministers describe as threats from the EU to block food imports.

The US secretary of state recently accused the UK and its European allies of “siding with the Ayatollahs” for blocking further United Nations’ sanctions on Iran.

VE Day: How is it being celebrated this year?

Image copyright Getty Images Image caption VE Day marked the end of fighting in Europe in World War Two The coronavirus outbreak means people are commemorating the 75th anniversary of VE Day within their own homes. All public gatherings have been cancelled – but a series of events is still going ahead to mark the […]

Coronavirus: NHS may need to hire cabin crew from airlines

Image copyright Getty Images The NHS in England may start hiring airline staff who have lost their jobs to fill a gap in nurse numbers, its chief executive has said. Sir Simon Stevens told MPs airlines hired nurses from the NHS to work as cabin crew in the early 2000s. It was now possible the […]

Image copyright Crean family Image caption The family of Joyce Crean, who died in April, called the situation ‘an absolute disgrace’ The Welsh Government has been reported to the Equality and Human Rights Commission over fears older people’s rights could have been breached. The Older People’s Commissioner for Wales says comprehensive testing for Covid-19 in […]