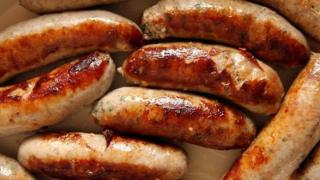 The UK has said it would be “very unusual” for the EU to seek to block post-Brexit food imports amid a growing dispute over the issue.

The EU has cast doubt on whether it would grant Britain a “third-country listing” for exports of products of animal origin, citing “uncertainties” over its biosecurity controls.

Such exports are worth £5bn to the UK.

A government spokesman said the right to export was the foundation of any kind of agricultural relationship.

UK firms exporting goods to mainland Europe will face extra checks when the country leaves the single market and customs union on 1 January at the end of the post-Brexit transition period.

Talks over a free trade agreement, which it is hoped will eliminate nearly all tariffs and minimise other barriers to trade, are continuing.

But the two sides remain far apart over several key issues and the process risks being derailed by an acrimonious row over UK plans to pass legislation giving it the right to over-ride aspects of the withdrawal agreement.

The European Commission is due to decide in the coming months on whether to allow British exports of live animals, products of animal origin, such as meat, fish, eggs and dairy products, and animal by-products to continue.

The granting of a “third country” licence to the whole of the UK had been seen as something of a formality, given the EU’s similar arrangements with other nations.

The two sides have already agreed that Northern Ireland will remain in the EU’s sanitary and phyto-sanitary “zone”.

But speaking after the latest round of talks concluded on Thursday, the EU’s chief negotiator said “more clarity” was needed about Britain’s own hygiene and disease control procedures before an “assessment” could take place.

Michel Barnier said “many uncertainties” remained about how they would operate after 31 December.

A Downing Street spokesman said: “It would be very unusual for the EU to go down this route and deny the UK listing.

“The right to export is the absolute basis for a relationship between two countries that trade agricultural goods. It is a licence to export and entirely separate from the issue of food standards.”

The EU accounted for about 60% of all UK food and drink exports in 2019, although this figure has fallen from more than 70% five years ago.

Image copyright EPA Boris Johnson will be questioned by senior MPs later amid continued calls for his top adviser to resign. It marks the first time he has appeared before the Commons Liaison Committee – the only committee that gets to question the PM – since taking office. Committee members are expected to ask Mr […]

Image copyright Getty Images Wide-ranging security flaws have been discovered in the coronavirus contact-tracing app being piloted in the Isle of Wight. The security researchers involved have warned the problems pose risks to users’ privacy and could be abused to prevent contagion alerts being sent. GCHQ’s National Cyber Security Centre (NCSC) has acknowledged the issues […]

Media playback is unsupported on your device Media captionSir Keir Starmer on Robert Jenrick: “He says the matter is closed, but it’s far from closed.” Housing Secretary Robert Jenrick still has questions to answer over his role in a planning case involving a Tory donor, Sir Keir Starmer has said. The Labour leader told the […]