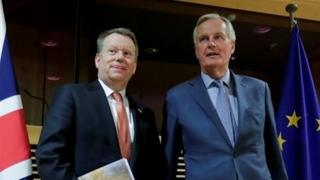 Boris Johnson has been clear with the EU that the time left to get a post-Brexit trade deal in place is in “short supply”, Downing Street says.

The prime minister has set a deadline of this Thursday, after which he has said the UK is ready to “walk away”.

No 10 said the time limit was still in place and the government was trying to “bridge” disagreements over fishing rights and state aid for businesses.

Meanwhile, the UK’s negotiating team is in Brussels for further talks.

These come after Mr Johnson and European Commission President Ursula von der Leyen called for an intensification of discussions.

The prime minister set his deadline to coincide with the start of an EU summit, at which leaders will discuss the state of the trade talks.

Both sides have spoken of progress in the last couple of weeks, but there are still major disagreements on two issues in particular.

First, the EU wants the UK to follow its rules on state aid – financial assistance given by government to businesses – but the UK says it would undermine independence.

Second, the UK wants full access to EU markets to sell its fish, but in return the EU is demanding full access for its fishing fleets to UK waters – which the UK does not want to provide.

It has been reported that France is ready to rule out a deal if the UK does not back down over fishing rights.

If no agreement is reached, the UK and EU would do business under World Trade Organisation rules from 1 January next year, which would mean tariffs on goods.

The UK’s chief negotiator, Lord Frost, said he would advise the prime minister on whether the UK’s set conditions for a deal have been met following his talks with EU counterpart Michel Barnier in Brussels.

Coronavirus: ‘Right we have a local solution’ – Patel

Home Secretary Priti Patel has said that a localised lockdown could be used in Leicester to control a coronavirus outbreak there. Speaking on the Andrew Marr Show, she said extra support would be going into the area and added: “With local flare-ups, it is right we have a local solution.” Source link 60 SHARES Share […]

Image copyright Getty Images Image caption Amy Callaghan was found collapsed by her partrner Amy Callaghan, the MP for East Dunbartonshire, has undergone neurosurgery after suffering a brain haemorrhage. The SNP MP collapsed at her home last Wednesday. A statement from her office said the 28-year-old was in a stable condition and was “now beginning […]

Image copyright Simon Davis/DFID The government department responsible for overseas aid is to be merged with the Foreign Office (FCO), the BBC understands. The move to combine the Department for International Development (DfID) and the FCO follows a review into UK aid spending by crossbench peer Lord Bew. PM Boris Johnson is expected to confirm […]