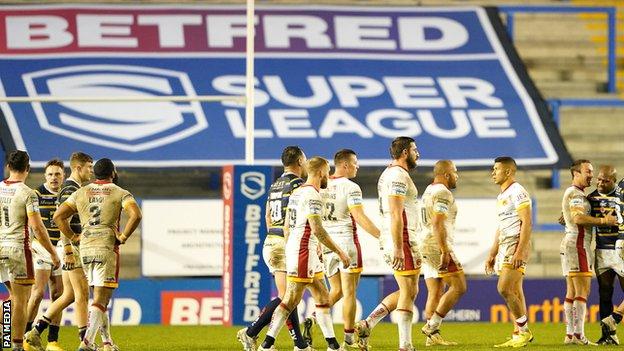 The government has announced a rescue package of £300m of emergency funding for sports impacted by the absence of spectators because of coronavirus.

Both rugby codes and horse racing are among the beneficiaries, but not clubs in football’s Premier League nor the English Football League.

“Clubs are the beating hearts of their communities – this boost will help them survive this difficult winter period,” said DCMS minister Oliver Dowden.

The government said the Sports Winter Survival Package, which will be largely composed of low-interest loans, will support rugby union, horse racing, women’s football and the lower tiers of the National League. It added that rugby league, motorsport, tennis, netball, basketball, ice hockey, badminton and greyhound racing were also in line to benefit.

Sports minister Nigel Huddleston added that grants would be available where organisations were unable to repay loans. He also said “the door was open” to any sport requiring funding, including cricket which was not on the initial list.

The money available is for sports in England, with Scotland, Wales and Northern Ireland responsible for their own budgets.

The Department for Digital, Culture, Media & Sport (DCMS) statement added: “Preliminary allocations have been made on a needs-based assessment process and reflect the submissions made from the individual sports, and the funding process will be overseen by an independent decision-making board and supported by Sport England.”

It said the first tranche of funding will be distributed in the coming weeks.

Note: The final amount received by each sport/organisation may differ from the amounts set out when final decisions are made by an independent decision-making board, and supported by Sport England.

‘It’s a bit of breathing room’

Chief executive officer Bill Sweeney said the Rugby Football Union was grateful for the “much-needed support” and that the organisation would work with the government to find the “appropriate balance between loans and grants” for the different areas of the sport.

Kat Ratnapala, director of netball at Saracens Mavericks, told BBC Radio 5 Live that the funding would help her club compete in next season’s Superleague.

“This means a huge deal to us,” she said “The big thing for us is to make sure we are prepared and financially able to start our new campaign in February.

“It’s been a tough year for us, financially, to make ends meet. We set up a funding page just so we could come through the first Covid lockdown. It’s a loan and we need to pay that back eventually.

“We’re definitely not out of the woods, but it’s a bit of breathing room so that we can get back on to court at least and get a full season under our belts.”

Adrian Christy, Badminton England’s chief executive, said the funding could help stave off the threat of job losses in the organisation.

“Since the start of the pandemic, Badminton England has lost more than £2.2m in income,” he told BBC Radio 5 Live. “The £2m award will help significantly towards closing the gap.

“It ensures the Yonex All-England Championships can take place – it’s the biggest event on the world tour and a qualification event for the Olympics.

“The operation of the organisation also needs the support with 25% of our staff at risk of redundancy – we hope we can save some jobs as a direct consequence. And also, we repurposed Sport England’s money from the outset for our survival. That money was taken away from the grassroots.”

Coronavirus: Assembly to meet on Tuesday over exam results

Image copyright Getty Images Image caption The assembly was not due to return from summer recess until 7 September The Stormont Assembly will meet on Tuesday to discuss the ongoing dispute over exam results in Northern Ireland. The SDLP had proposed the move via a recall motion, which needed at least 30 signatures in order […]

Coronavirus: PM to set out strategy to tackle obesity in UK

Image copyright PA Media Image caption GPs will be encouraged prescribe cycling where appropriate Boris Johnson will set out his strategy to tackle obesity on Monday – including a 12-week plan for people lose weight and cycling being prescribed by GPs. It comes after Public Health England research found that being overweight or obese puts […]

Covid: All MPs should take part in debates online – report