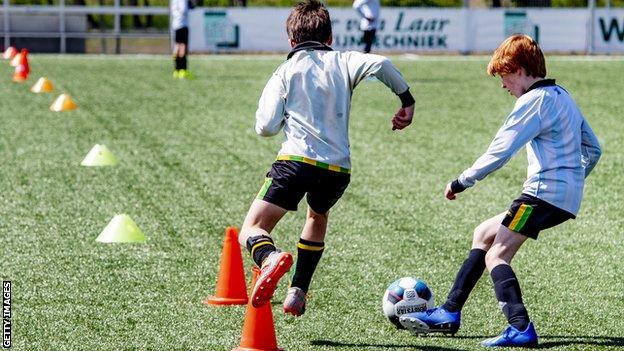 There were calls for youth sport to be exempt when the new restrictions come into effect on Thursday.

But Dowden confirmed it would only be permitted in school.

“Unfortunately we need to pause grassroots sport outside school to reduce the transmission risk from households mixing,” he tweeted.

“As soon as we can resume this, we will.”

Elite sport can continue behind closed doors during the lockdown.

Former Wales midfielder Robbie Savage, who coaches a junior team, criticised the decision to suspend children’s sport in a series of tweets.

Quoting Dowden’s tweet, he said: “Have you or any of your senior government officials been to a grassroots game since lockdown? Do you have any idea what it’s like for thousands of grassroots volunteers? Do you know the impact of this decision on youngsters’ mental and physical wellbeing?”

“To lose some grassroots clubs will leave us with a legacy of a generation who are inactive and unable to find a way into sport,” she said.

Former Department for Digital, Culture, Media and Sport select committee chair Damian Collins had written to Dowden asking the government to allow youth sport to continue in England after 5 November.

He called on the government to extend the definition of elite sport to include academy players at Premier League clubs and those in development centres such as the England Rugby developing player programme and Sport England’s talented athlete scholarship scheme.

“Young people will currently be allowed to continue with sport at school, and we believe that the risks to the spread of the coronavirus from outdoor grassroots youth sport would be minimal,” he said, in a letter also signed by former sports ministers Tracey Crouch and Helen Grant.

“There would, however, be clear and lasting benefits for these young people if the government could support this.”

Leisure centres and gyms will close, as will other indoor and outdoor leisure facilities.

On Monday, Prime Minister Boris Johnson told the House of Commons that there would be no exemptions.

The government’s refusal to grant exemptions to tennis, golf, gyms and swimming pools is proving among the most contentious elements of the second national lockdown.

But the decision to suspend youth sport is especially controversial.

Government insists it is necessary to reduce the risk of transmission through the mixing of households. But for many involved in junior grassroots teams, it is a disproportionate and unnecessary measure that risks doing more harm than good, damaging youngsters’ physical and mental health at a time when the amount of PE and organised sport provided in many schools has already decreased as a result of the pandemic.

Last month the Youth Sport Trust found that a fifth of secondary schools and a sixth of primary schools had cut PE since the first lockdown, and half would be delivering less extracurricular sport in the autumn term.

Given this trend – and the fact it is harder for young people to exercise outside school hours in the winter months – there will be mounting pressure on ministers to reconsider – and if not, to make the return of youth sport next month a priority, even if the lockdown extends beyond that.

Image copyright Getty Images Poor regulation of antibodies tests – that could indicate if someone has had coronavirus – could be putting the public at risk, doctors have warned. The Royal College of Pathologists has written to the health secretary, calling for rules to be tightened on kits sold direct to consumers. The letter warns […]

Hundreds of families ‘face eviction by Ministry of Defence’

Image caption The tenants are amongst nearly 350 across the UK facing eviction Hundreds of families have been served eviction notices by the Ministry of Defence (MoD), according to a letter signed by MPs including senior government minister Michael Gove. Residents in Pembrokeshire say the notices have caused them “sleepless nights” at a time when […]

Image copyright Getty Images Image caption A large proportion of NHS doctors are from an ethnic minority background The human rights watchdog will investigate racial inequalities “laid bare” by the coronavirus outbreak. The Equalities and Human Rights Commission will examine “the loss of lives and livelihoods” of people from different ethnic minorities. This week a […]