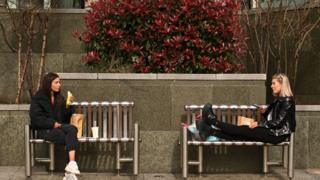 ‘The North’ always feels like it’s a bit lumped together.

Motorway signs, Game of Thrones and when governments talk about anywhere up from Birmingham.

It might be Westeros’ fault, it might even be our fault for being proud of being northern and banging on about it all the time.

But it doesn’t always seem fair.

There’s quite a lot of different places up here, you know. Try telling someone from Barnsley that their accent sounds like they’re from Sheffield. Sixteen miles makes a lot of difference to your vowels.

I texted a few local leaders at the start of the week telling them the government was saying it was closely working with local councils on further restrictions to tackle Covid-19.

One of the Labour responses was just three letters: “Lol”.

‘Northern Fury’ was on the front page of national newspapers this week. Anger here that the papers seemed to know what was going on but leaders here didn’t. The north is revolting, it seems.

Not only are there different parts of the north, but there are different restrictions. Some places have had rules change several times over just a couple of days. Others have managed to escape, only being under the national guidelines.

This is where the northern uproar begins. Not because of the rules themselves, although there’s argument there as well of course, but the communication around them.

I asked one person at a council up here when and how they’d heard about the latest restrictions. When the government press release came out, was the reply.

Councils and mayors know their patches pretty well. They’re the ones knocking on doors to get elected there. But there’s a feeling the government doesn’t trust them to do the job.

Cities like Leeds have offered to take more responsibility for test and trace. Something Housing Secretary Robert Jenrick says the government is now likely to give them in the future.

“People who know their own community, particularly harder to reach communities, are bound to be better than Whitehall or national contract tracers, so we are going to be supporting them to do that,” he told Andrew Marr.

“We’re trying to co-design with them so that things are not being done to local areas they’re being done with those local communities.”

Back to Game of Thrones and leaders up here held a very Westeros-sounding virtual gathering called ‘The Mayors of the North’ this weekend, which included South Yorkshire Mayor and Barnsley MP Dan Jarvis.

“I think there have been too many occasions where we’ve sat in the room with a minister and felt like boxes were being ticked and that we weren’t genuinely being consulted,” he says.

“It’s felt on occasions that rather than partners we are passengers in this process – that’s not how it should be. At the best of times you need joined up government local, regional and national but in a crisis it’s even more important people pull together”.

The government says it is involving local leaders in these discussions, saying talks are “significant and regular”. This last week has seen them getting individual briefings about what the government’s thinking is on the next stage of restrictions.

These decisions are made at a national level but there is increasing frustration that places feel they’ve been left out of the decision making process.

Wigan MP Lisa Nandy is one of those that thinks the decisions have already been made and the north is being told, not consulted.

“I haven’t felt anger like this since I was growing up in the 1980’s, people feel that they haven’t just been abandoned, they now feel that the government is actively working against us,” she says.

Of course it’s very easy to say this is just Labour mayors railing against the Conservative government. But, remember having elected mayors was a Conservative idea in the first place.

And even though no one living here ever uses terms like ‘Red Wall’ and ‘Blue Wall’, those new Conservative MPs in northern seats will be watching very closely.

Thirty five of them have even joined a new club called The Northern Research Group to try and make sure the government is held to its promise of ‘levelling up’.

Rossendale and Darwen MP Jake Berry is leading it, and as he told he told The Week in Westminster on Radio 4: “We don’t form a government unless we win the north.”

Image copyright PA First Minister Arlene Foster has said she cannot currently “stand beside” Michelle O’Neill and “give out public health advice” after the deputy first minister’s attendance at a funeral. Mrs Foster said the executive’s credibility had been damaged and she should stand down while investigations take place. Ms O’Neill has defended attending the […]

Coronavirus: What is the true death toll of the pandemic?

At least another 130,000 people worldwide have died during the coronavirus pandemic on top of 440,000 officially recorded deaths from the virus, according to BBC research. A review of preliminary mortality data from 27 countries shows that in many places the number of overall deaths during the pandemic has been higher than normal, even when […]

Image copyright Getty Images Image caption Extinction Rebellion said it planned to “peacefully disrupt” Parliament with 10 days of demonstrations At least 65 people have been arrested at climate change protests causing disruption across England. Extinction Rebellion organised national action in London and Manchester to urge the government to prepare for a “climate crisis”. Campaigners […]