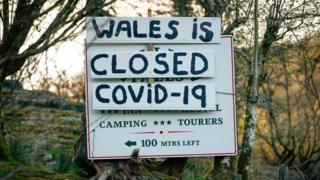 People will not use services reopened when the coronavirus lockdown is eased if they “don’t think it’s safe”, the first minister has warned.

Mark Drakeford said the process would need to be “careful and cautious and we will have to take people with us”.

“You can open up anything you like, if people don’t think it’s safe to take up what is now available to them they won’t come,” Mr Drakeford told the BBC.

He also defended Wales’ approach to testing, after Conservative criticism.

Speaking on BBC Radio 4’s Today programme, the first minister said: “We’ve been thinking about if you were, for example, to reopen libraries, what would the rules need to be?

“What would you have to put in place so that people would feel safe and confident to use that facility again?”

“I think we need a real focus on a conversation with the public about the things they would want to see organised in advance, so anything we open up looks to them like somewhere they would feel confident to take up,” he said.

The first minister said “anything we open up will need a new set of rules, a protocol”.

People needed to be able to look at those rules and say “I can see that they’ve thought about this, they’ve put things in place, I feel OK to go back to that facility,” he said.

Mr Drakeford repeated his call for a “four-nation approach” to leaving the lockdown.

“But we will use the powers we have to fine-tune the arrangements to make them right for Wales.”

On Thursday, twelve of Wales’ Conservative MPs expressed “alarm” at the “disparity” between Wales and England on coronavirus testing.

Wales has not followed England in expanding testing to people with symptoms if they are over-65 or need to leave home for work, nor to all care home residents and staff.

The MPs claimed it meant some people would be infected “unnecessarily”.

But Mr Drakeford told the Today programme on Friday the Welsh Government had not seen evidence that to test people who do not have symptoms “would tell you anything that would be useful”.

Care homes should be operating “as though everybody was potentially having the virus”, he said.

“We’re not certain that it makes a great deal of difference to the way the care home would operate,” he said.

“The utility of the test, the purpose of the test, we’ve been focused on that, while continuing to increase the “number of tests available.

Image copyright Getty Images The UK economic slump caused by Covid-19 will be less severe than expected, but the recovery will also take longer, the Bank of England has said. The faster easing of lockdown measures and a “more rapid” pick-up in consumer spending meant the economy rebounded earlier than it had assumed in May. […]

Coronavirus: Small shops in NI can reopen from Friday

Media playback is unsupported on your device Media captionWhat does the ease in restrictions mean for people in Northern Ireland? All non-essential retailers can reopen in Northern Ireland from Friday, Stormont’s economy minister has said. Pressure had been building on Stormont ministers to name a date, as only large retailers and shops in retail parks […]