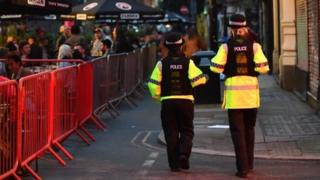 Men aged 18 to 34 from ethnic minority groups were twice as likely to be fined for breaching lockdown coronavirus laws as young white men, figures show.

A National Police Chiefs’ Council report said overall those from minority ethnic groups were 1.6 times more likely to be fined than white people.

Government statisticians analysed 17,039 fixed penalty notices imposed from March to May in England and Wales.

NPCC chairman Martin Hewitt said it was “a concern to see disparity”.

But he said it was a “complex picture” and each force will work to “mitigate any risks of bias – conscious or unconscious”.

Police have been able to issue fines for breaching public health regulations introduced to help prevent the spread of Covid-19 since 27 March.

Mr Hewitt said issuing a fine was “a last resort” and the data only presented a “partial picture” because it “does not show the hundreds of thousands of interactions with the public where engagement, explanation and encouragement was effective and there was no need to issue a fine”.

“Many forces have brought in community representatives to help them scrutinise the circumstances around each FPN (Fixed Penalty Notice) and if it has been issued fairly,” he said.

The analysis showed the highest overall disparity rates to be in Cumbria, North Yorkshire and Lancashire, where those from black, Asian and ethnic minority backgrounds were 6.5 times, 5.6 times and five times more likely to be fined than white people respectively.

Only one police force, Cheshire, recorded no overall level of ethnic disproportionality.

BBC Home Affairs correspondent Danny Shaw said senior police officers had highlighted that high levels of disproportionality in some regions may be due to large numbers of visitors travelling to areas with proportionately low numbers of residents from black, Asian and ethnic minority groups.

And Mr Hewitt said: “For a number of forces, continued focus on crime and violence could affect their disparity rate as areas… that have been a focus of police activity are also areas with a higher concentration of black, Asian and minority ethnic people, which also increases the possibility of officers identifying and dealing with breaches during those deployments.”

The report also said there were 20 forces that each issued fewer than 40 fines in total to people from ethnic minority backgrounds.

Mr Hewitt said a “plan of action” was being developed “to address issues of inclusion and race equality that still exist in policing – like the lower trust in us from black communities, their concerns about use of powers like stop and search and the concerns from people of colour within policing about inclusivity and equality at work”.

NPCC data also showed the total number of fines issued to 20 July had risen to 18,669 across England and Wales, with eight fines imposed in the previous two weeks – six of which were for people not wearing face coverings on public transport.

Police have fined one person for not self-isolating after arriving in England. Rules mean travellers from certain countries are told told quarantine for 14 days after returning home.

Mr Hewitt said he was not aware of any fines being issued to shop customers since face coverings were made mandatory in stores in England on Friday.

Image copyright Getty Images The key evidence on the safety and impact of reopening schools has been published by the government’s scientific advisory group, Sage. Sources involved said the risk of coronavirus to pupils going back to the classroom was “very, very small, but it is not zero”. They also said teachers were not at […]

Image copyright Getty Images Britain is “ready to welcome the best and the brightest global talent”, Home Secretary Priti Patel has said, as she prepares to unveil more details of her post-Brexit immigration plan. The new system is set to come into force on New Year’s Day, immediately ending freedom of movement with the EU. […]

Image copyright Getty Images Hormone-fed beef and chlorine-washed chicken should remain banned in England after Brexit, the government has been warned. Ministers say the issue will be dealt with in the upcoming Trade Bill. But opponents of these practices say that could lead to farm standards being bargained away in negotiations. Instead, they want ministers […]