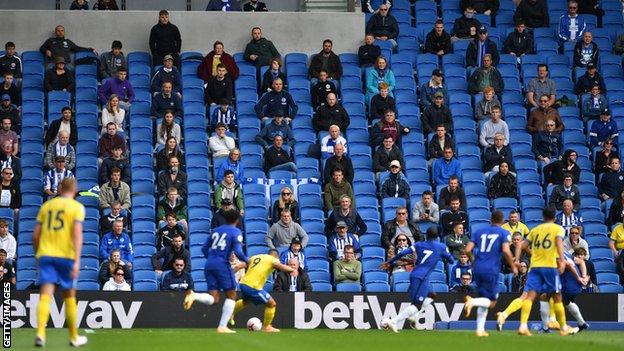 The government has refused to say when it expects spectators to be allowed back inside sports venues in England.

Speaking at a parliamentary debate on the issue, Sports Minister Nigel Huddleston said he wanted it to happen “as soon as it is safe to do so”.

But despite requests from MPs, he declined to provide a precise roadmap for sports.

Almost 200,000 people have signed petitions calling for fans to be able to return.

Nearly all elite sport in England has taken place behind closed doors since March.

“One of the challenges we’ve got is… everyone saying ‘can I get back to my stadia?'” Huddleston said.

“You times that by multiple levels, multiple leagues and sports, and all of a sudden we’ve got a whole scale which is far beyond what we believe is acceptable at this moment in time.

“But the point made by several members today, that a ‘one size fits all’ [approach] may not be appropriate, is something we’re looking at.

“A key issue is that this is not just about fans sitting in stands inside the stadia… but we must consider the whole fan journey as well, from home to venue, considering how fans travel to and from stadia, and the risk of gatherings in and out these venues, and a high number of contact points that this risks.

“We do keep a very close eye on what is happening in other countries.”

Speaking at a meeting of the cross-party Petitions Committee, Huddleston was asked by Shadow Sports Minister Alison McGovern when government-backed pilots with limited numbers of spectators in attendance may resume.

Plans for a partial and staged return of fans from 1 October were suspended after a rise in the number of coronavirus cases.

However, at the same time London’s O2 Arena announced 4,700 people would be able to attend a concert in December.

The Royal Albert Hall will also welcome audiences of up to 2,500 back for a number of concerts this Christmas with one senior source from within football telling BBC Sport: “The inconsistency in the approach is stark and illogical.”

McGovern said: “I worry that (sports) have been left hanging a bit.

“The position that football has been put in compared to other large events is hard to understand.

“We were on a journey and the process needs to be completed. So can he say when he anticipates that happening?”

Huddleston replied: “We want to get pilots back and fans back into stadia as soon as possible.

“We’ve had a plan from very early on in lockdown. And it’s been stated and it’s out there, and what we’ve had to do on a couple of occasions unfortunately is press the pause button. But we want to get back to the plan as soon as we can.”

Last month the English Football League rejected a £50m bail-out offer from the Premier League. The heads of both organisations, along with the chairman of the Football Association, will appear in front of the Digital, Culture, Media and Sport committee on Tuesday.

“There is plenty of money in football, but it’s not distributed in the right way,” said Huddleston.

“For the good of the sport, they must come to an arrangement. It’s not acceptable for public money to be bailing out elite football.

“I do recognise they each have stakeholders who are difficult to deal with but I do appeal to them to come to a compromise as soon as possible.”

The minister said the DCMS was in the “final stages” of discussions with the Treasury over a rescue package for other sports facing an unprecedented financial crisis because of the pandemic.

Image copyright Getty Images The government has denied that travellers from France will be exempted from the planned coronavirus quarantine measures. Under the plans announced last weekend, people arriving from abroad must isolate themselves for two weeks. Those with nowhere to stay will be obliged to isolate in accommodation provided by the authorities. Initially, a […]

Image copyright Getty Images Image caption Anti-racism protesters threw the statue of slave trader Edward Colston into Bristol harbour in June Public statues of controversial historical figures should be “retained and explained” instead of being taken down, the government has said. Culture Minister Matt Warman told MPs the UK’s heritage should not be removed from […]

SNP MP Drew Hendry has said Boris Johnson has been “caught red handed” on comments over Scotland. He said Scottish people had been “ignored throughout the Brexit process” and said that 14 polls in a row now showed a majority in favour of independence in the nation. The prime minister was criticised for reportedly telling […]