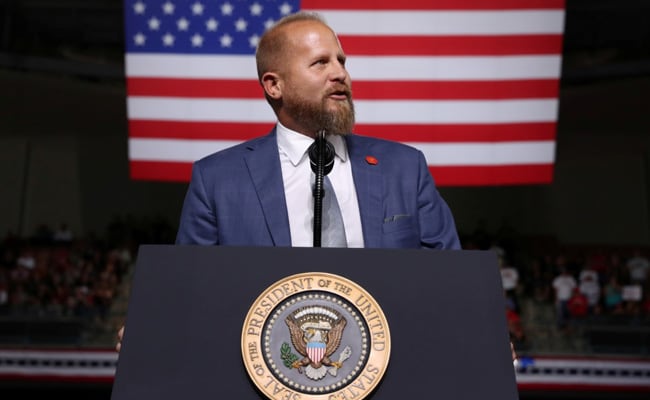 Bradley Parscale was fired as campaign manager when Trump was sinking in the polls in July.

Donald Trump’s former campaign manager Brad Parscale had 10 guns in his Florida home and his wife accused him of beating her, police said Monday, after he was dramatically detained outside his house.

Parscale allegedly hit his wife, loaded a pistol and threatened to commit suicide during an argument on Sunday, a police report about the incident in Fort Lauderdale, 50 kilometers (30 miles) north of Miami.

Parscale was fired as campaign manager when Trump was sinking in the polls in July, just four months before the November election.

In a police bodycam video, Parscale’s wife, Candice, is seen outside the house in a bikini and towel telling police he was “acting crazy” and had loaded a handgun.

“I saw him open the blinds in the front yard and he closed them and I heard what I thought was a gunshot,” she said.

The footage showed Parscale, 44, later emerging from the house, shirtless and holding a beer can.

He was tackled by armed police, knocked to the ground and restrained in handcuffs as he repeatedly said “I didn’t do anything.”

The police report said he appeared to be drunk and quoted Candice Parscale, 41, as saying her husband had turned violent in recent weeks.

“I noticed several large sized contusions on both of her arms, her cheek and forehead,” wrote detective Steven Smith in the report. “When I asked how she received the bruising, (she) stated Brad Parscale hits her.”

The fired campaign chief was reported to have two shotguns, two rifles and six handguns on the property. He was committed to a mental health facility for evaluation.

He was demoted shortly after a Trump campaign rally in Tulsa, Oklahoma that was widely panned for its poor attendance. He remained a senior member of the campaign team.

The world is still grappling with the coronavirus pandemic, whose source of origin is yet to be ascertained. The World Health Organisation (WHO) says identifying and understanding the origin of coronavirus pandemic is key to an effective fight against ravaging Covid-19. And, at such a moment, the discovery of a new virus in China has […]

China warns US against ‘playing with fire’ over Taiwan visit

TAIPEI: China warned Washington not to “play with fire” on Wednesday as a US delegation wrapped up a historic trip to the self-ruled island of Taiwan. Beijing has been infuriated by the highest-profile visit in decades to Taiwan, which it sees as part of its territory, as US-China relations plunge to a record low over […]