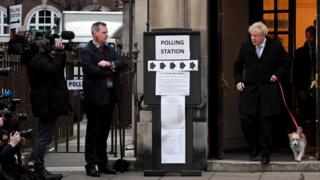 The power to choose the date of the next general election should not be handed back to prime ministers, a cross party committee of MPs has said.

Boris Johnson is committed to scrapping the 2011 Fixed-Term Parliaments Act.

He blames it for prolonging the Brexit paralysis that gripped Parliament last year.

But MPs looking into the issue say there should be no return to the days when the date of the next election was a matter for the government alone.

The Public Administration and Constitutional Affairs Committee says that would give an unfair advantage to the party in power.

Under the Fixed-Term Parliaments Act, the next UK general election will be on Thursday, 2 May 2024 – but Mr Johnson is seeking the power to go to the country before that date if he wants to.

In a new report, the committee says change is needed to prevent a repeat of last year’s “paralysis” when MPs refused to back Mr Johnson’s Brexit deal but would not vote for an election.

The deadlock was finally broken when the Commons passed a bill overriding the Fixed-Term Parliaments Act, allowing December’s election to take place.

The government has to set up a committee next month to review the workings of the Act, which was brought in by David Cameron’s coalition government.

Then Deputy Prime Minister Nick Clegg wanted a guarantee that the Conservatives would not call an early election, leaving his Liberal Democrats stranded.

Under the terms of the Act, there can only be an early election if the government lost a vote of confidence or there is a two-thirds “super majority” in the House of Commons.

Before the Act came into force, prime ministers were able to seek a dissolution of Parliament from the Queen to hold an early election, under so-called prerogative powers.

The committee argues against a simple return to that system, warning that it could lead to legal challenges.

It also makes the case for a five-year term to be the “default” position at Westminster.

Conservative MP William Wragg, who chairs the committee, said: “Although new legislation is required, our report shows that the Fixed-term Parliaments Act did go some way to achieving some of its key aims.

“Witnesses noted that the Act also succeeded in its narrow political aim of giving stability to the coalition government, which served its full term.

“It also limited the ability of incumbent governments to gain an unfair advantage over their opponents by choosing an election date that suits their political ends.

“Whatever legislation replaces the Act it is important that this ‘level playing field’ for democracy is maintained.”

The committee argues that giving MPs the power to set election dates could “provide one route to avoid unnecessary paralysis at times of deadlock”.

A Cabinet Office spokeswoman said in a statement the Fixed-Term Parliaments Act was passed in unique circumstances “and led to parliamentary paralysis at a critical time for the country”.

She added: “That is why this government’s manifesto made a commitment to repeal the Act.

“Careful consideration is being given to what will need to be put in place to ensure that this important element of our constitution, the right to call an election, enables the effective operation of our democracy.”

Coronavirus: Health minister says app should roll out by winter

A government minister has said the NHS coronavirus contact-tracing app is “not a priority” and he was not sure it would be out by winter. The app, which has been trialled on the Isle of Wight, was initially expected to launch nationally weeks ago. Lord Bethell, the Minister for Innovation at the Department of Health […]

Boris Johnson said no country had a “functioning contact tracing app” to combat coronavirus. Sir Keir Starmer said Germany has one which has been downloaded 12 million times, but Boris Johnson said he was “completely wrong”. The Labour leader asked the prime minister, where was the promised UK app, where £12m had been spent on […]

The coronavirus pandemic could see universities losing staff with the loss of fees from domestic, and particularly foreign, students. Politics Live reporter Greg Dawson heard how universities are freezing posts, and how fewer students would affect the economies of the wider communities where they were set to study. UK viewers can watch the full programme […]