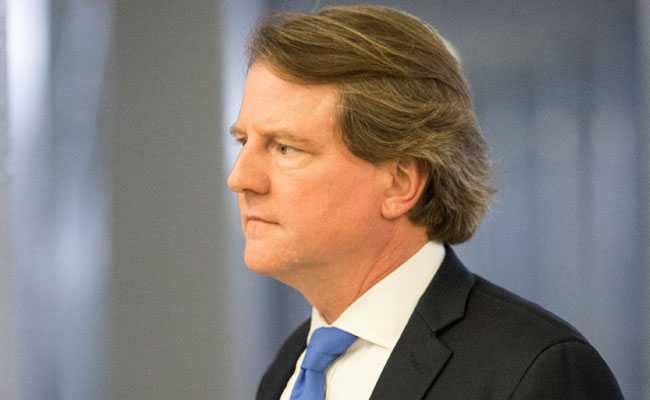 After stalling for two years, Donald Trump’s former White House lawyer has agreed to testify on allegations the ex-president illegally obstructed the investigation into his campaign’s ties to Russia, a court filing said Wednesday.

Don McGahn, who was White House counsel in 2017 and 2018 when Trump was investigated by independent prosecutor Robert Mueller, had fought a subpoena by the House Judiciary Committee to testify in its examination of Mueller’s findings.

The Mueller report said that Trump had ordered McGahn to have Mueller removed as the Justice Department special counsel in 2017, an order that McGahn refused.

When media heard of that, Trump also allegedly ordered McGahn to deny it ever happened.

Despite Mueller’s compiling a list of about a dozen instances of Trump attempting to interfere with the Russia investigation, in early 2019 attorney general Bill Barr declared there were no grounds to bring a case against the president.

The House Judiciary Committee, under Democrat Jerry Nadler, then launched an impeachment investigation against Trump. But that stalled when key witnesses, most prominently McGahn, refused or were denied White House permission to testify.

On Wednesday — nearly four months after Trump left office — a court filing said the committee and McGahn had reached an agreement for him to testify behind closed doors.

The interview will focus on information in the Mueller report that involved McGahn, and ask McGahn whether it was accurate.

A transcript of the interview will be made public.

But even if McGahn supports the allegations of obstruction, it is not clear how the committee will proceed against Trump, who was impeached an unprecedented two times for actions separate from what Mueller investigated.

The court was told that Trump was not a party to the agreement between the committee and McGahn, leaving open the possibility that he could still object, claiming executive privilege.

“When the former President vowed to fight ‘all of the subpoenas’ aimed at his administration, he began a dangerous campaign of unprecedented obstruction,” Nadler said in a statement.

“We begin to bring that era of obstruction to an end today,” he said.

There was no indication when McGahn would testify.

A decision about whether to resume administering the Johnson & Johnson coronavirus vaccine should come this Friday, when an expert panel that is advising the Centers for Disease Control and Prevention is scheduled to meet, according to Dr. Anthony S. Fauci, the nation’s leading infectious disease expert. “I think by that time we’re going to […]

Ever since Canada closed its borders last March to help contain the coronavirus pandemic, many Canadians have had this message for American visitors: “We miss you, but please stay away!” Such is the alarm about American tourists crossing the border that some Canadians driving cars with U.S. license plates in British Columbia have been harassed, […]

The court sought the law ministry’s response after going through a statement by the World Health Organisation, which has declared virginity testing as unscientific, medically unnecessary and unreliable. The European Union retaliated against Venezuela on Thursday, declaring the head of the countrys delegation to the 27nation bloc persona non grata, a day after the South […]