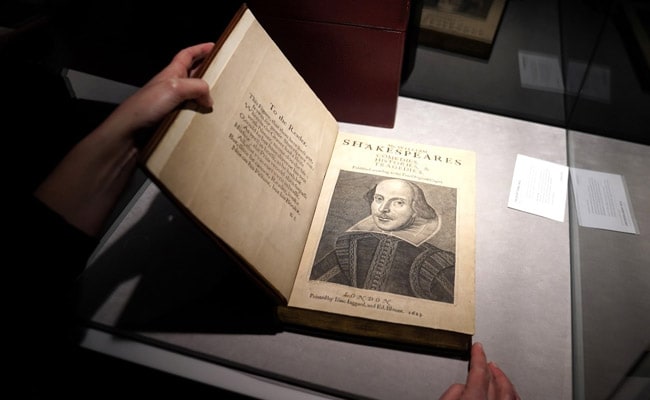 The book was put up for auction by Mills College, a private liberal arts college in Oakland, California.

A rare 1623 book that brought together William Shakespeare’s plays for the first time sold for a record $9.97 million at auction on Wednesday, Christie’s in New York said.

The First Folio containing 36 of Shakespeare’s plays is one of only six known complete copies in private hands and had carried a pre-sale estimate of $4 million to $6 million.

The identity of the buyer was not immediately known.

Wednesday’s auction price also marked a new world auction record for any printed work of literature, and smashed the previous high of $6.16 million for a Shakespeare First Folio that was set in 2001, Christie’s said.

“Comedies, Histories and Tragedies” was compiled by friends of the English playwright and poet seven years after his death. It includes 18 plays that had never been published before and might have been lost, including “Macbeth” and “Julius Caesar.”

The book was put up for auction by Mills College, a private liberal arts college in Oakland, California.

Without the First Folio some of Shakespeare’s most famous lines would likely have been lost, including classics like “Friends, Romans, countrymen, lend me your ears,” from “Julius Caesar,” and “If music be the food of love, play on,” from “Twelfth Night.”

Wednesday’s sale was the first time in nearly 20 years that a complete copy of the First Folio had come to auction.

WASHINGTON: The Senate on Tuesday unanimously confirmed Gen. Charles Brown Jr as chief of staff of the US Air Force, making him the first black officer to lead one of the nation’s military services. Vice President Mike Pence took the unusual step of presiding over the vote, something he usually does to break ties. But […]

[FILE PHOTO] Indian Army truck crosses Chang la pass near Pangong Lake in Ladakh (Photo Credits: AP) A globally-renowned strategic and international security expert, Ashley J Tellis fears that the Ladakh faceoff between India and China could well escalate into an armed conflict between the two Asian giants. “What is very clear to me is […]