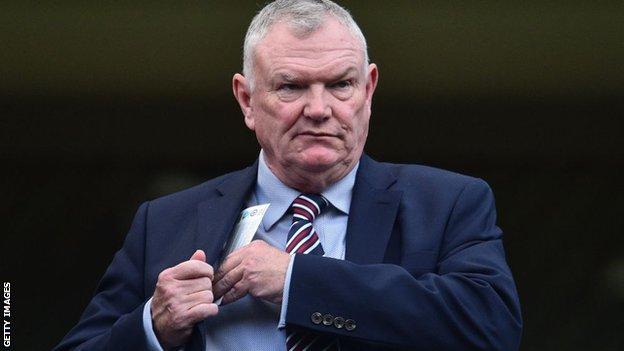 Greg Clarke has resigned as Football Association chairman following the language he used when talking to MPs about diversity.

Clarke used the term “coloured footballers” in a reference to black players when talking to members of the Department for Digital, Culture, Media and Sport select committee.

He apologised after being prompted to say sorry by MP Kevin Brennan.

Clarke had been talking via video link about the racist abuse of players by trolls on social media.

“People can see if you’re black and if they don’t like black people because they are filthy racists, they can abuse you anonymously online,” he said.

He had earlier spoken of the need to attract people into the sport from a range of communities.

“If you go to the IT department of the FA, there’s a lot more South Asians than there are Afro-Caribbeans. They have different career interests,” said Clarke.

He prompted further criticism when referring to gay players making a “life choice” and a coach telling him young female players did not like having the ball hit hard at them.

“We can confirm that Greg Clarke has stepped down from his role as our chairman,” said an FA statement.

“Peter McCormick will step into the role as interim FA chairman with immediate effect and the FA Board will begin the process of identifying and appointing a new chair in due course.”

Following his resignation, Clarke said: “My unacceptable words in front of Parliament were a disservice to our game and to those who watch, play, referee and administer it. This has crystallised my resolve to move on.

“I am deeply saddened that I have offended those diverse communities in football that I and others worked so hard to include.”

Image copyright Getty Images Image caption The government funded the “Eat Out to Help Out” scheme in August The UK government borrowed £35.9bn in August as tackling the economic fallout of pandemic took its toll on the public finances, official figures show. The figure – the difference between spending and tax income – was £30.5bn […]

Coronavirus: All primary pupils no longer going back to school

Image copyright PA Media Plans for all England’s primary children to return for a month before the summer break have been dropped by Education Secretary Gavin Williamson. Confirming the move, he told MPs he wanted all children back to school in September and that “exams will take place next year”. Labour’s Rebecca Long-Bailey expressed “dismay” […]