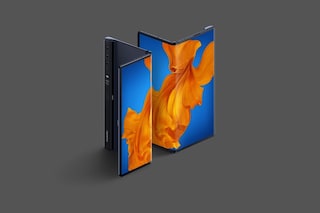 The Huawei Mate X is the Chinese manufacturer’s first foldable smartphone, which was unveiled last year with its unusual backwards-folding display. Now, it seems that the successor to the Huawei Mate X, the Huawei Mate X2 may be in the works as the smartphone has reportedly been spotted on Chinese certification site TENAA under model numbers TET-AN00 and TET-AN10. The same model numbers were spotted on Compulsory Certification of China (3C) website as well earlier this month. The smartphone is expected to come with 5G support and 66W fast charging.

The Huawei TET-AN00 and TET-AN10 received their TENAA certification on November 17, according to the listing first spotted by 91Mobiles. The listing also suggests that the supposed Huawei Mate X2 models will have dual-SIM support and will come with 5G capabilities. The TENAA listing did not mention anything apart from this. The smartphone has earlier been rumoured to have dual display like the Samsung Galaxy Fold series with a 120Hz refresh rate, and come with a HiSilicon Kirin 9000 SoC, Wi-Fi 6 and Bluetooth 5.1. Further, the Huawei Mate X2 is said to have an OLED display and a side-mounted fingerprint sensor.

Huawei has recently sold its Honor brand of youth-centric smartphones to a Chinese company called Shenzhen Zhixin New Information Technology. Huawei said it took the decision for its brand’s survival.

OnePlus has announced that it is installing charging stations with Warp Charge 30 fast charging support at Indian airports. The company has also rolled out a new feature called Nearby Charging Stations to help OnePlus phone users get notifications every time they are near a charging station at an airport. OnePlus has introduced its first […]

US President Donald Trump wears a facemask as he leaves Walter Reed Medical Center in Bethesda, Maryland heading to Marine One on October 5, 2020, to return to the White House after being discharged. Saul Loeb | AFP | Getty Images Facebook and Twitter on Tuesday took action against a post from President Donald Trump that […]

From Satya to Choked, the Journey of Anurag Kashyap

“I like to work with people who have all the time,” Anurag Kashyap tells Gadgets 360 over the phone from his home, sheltering in place thanks to the ongoing coronavirus pandemic. “Like in a movie like [the 2014 thriller] Ugly or [the Netflix series] Sacred Games, I like my actors to be with me. Even […]