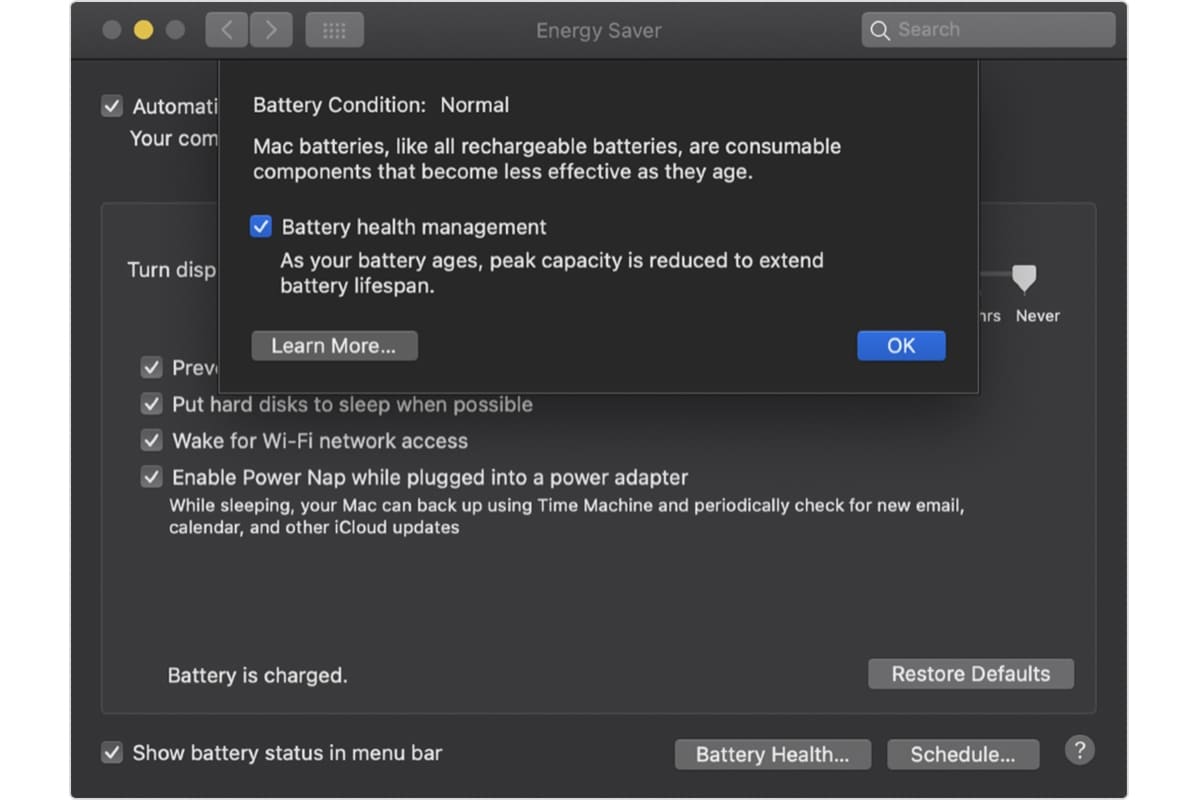 The biggest change in macOS Catalina 10.15.5 is the battery health management feature that was initially released in a preview of the latest update last month. The new feature monitors the temperature history of MacBook’s battery and its charging patterns to optimise maximum charge.

This means that while you’ll see 100 percent battery life after putting your MacBook on charge for some time, it may not exactly mean the 100 percent charge of the battery. Instead, it will be the maximum of what should be provided to the battery to maximise its lifespan. The new addition may, however, impact the amount of time your MacBook runs on one battery charge.

Battery health management is enabled by default in all MacBook models that supports Thunderbolt 3 and are running macOS Catalina 10.15.5. This means that you’ll get the new feature on any MacBook Pro launched since 2016 or a Retina MacBook Air after installing the latest update.

Having said that, Apple has provided the option to turn off the battery health feature by going to System Preferences > Energy Saver > Battery Health.

The latest macOS Catalina update also lets you disable automatic prominence in group FaceTime calls, which adjusts the size of the tile when a participant speaks. Apple provided this option first in iOS 13.5 and iPadOS 13.5 last week.

Apple has also added controls to adjust the built-in calibration for Pro Display XDR. Additionally, there are fixes for issues that exist in Reminders and the System Preferences settings. The update also fixes stability issues related to iCloud Photo Library and RAID volumes. Furthermore, there are security patches that you can view from the dedicated support page.

You can download macOS Catalina 10.15.5 on your Mac by going to System Preferences > Software Update or by visiting the About This Mac section from the Apple menu. A screen will emerge to provide the details of the update. Moreover, the latest software version is compatible with the devices supporting macOS Catalina 10.15.

Is iPhone SE the ultimate ‘affordable’ iPhone for India? We discussed this on Orbital, our weekly technology podcast, which you can subscribe to via Apple Podcasts or RSS, download the episode, or just hit the play button below.

Facebook’s Photo Transfer Tool Now Available in US and Canada

Facebook has been working on expanding the reach of its photo transfer tool to more regions and now, and it is now rolling out to users in United States and Canada. The tool lets users transfer their Facebook photos and videos directly to other services. As of now, it allows transferring to Google Photos. The […]

What is a ring light: Quarantine hit for videos

Photographer Shahar Azran has a ring light for joining video calls from his home in Englewood, New Jersey. Shahar Azran Maybe she’s born with it. Maybe it’s a ring light. Ring lights have long been used by photographers and, more recently, social media stars to improve their appearance. They reduce shadows and offer a more […]

NEW DELHI: It’s a big day for Apple users. The company is not only rolling out the latest version of its mobile operating system iOS 10, but also a brand new OS for Apple Watch and Apple TV, called watchOS 3 and tvOS 10 respectively. While the watchOS brings improvements in Siri, redesigned UI, new […]