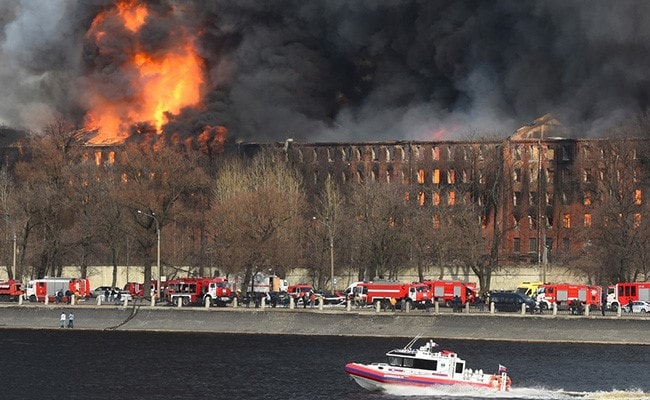 The enormous factory, founded as a cloth manufacturer in 1841, was engulfed in flames

A huge fire was burning in a historic factory in Russia’s second city Saint Petersburg on Monday, sending clouds of black smoke over the city.

The emergencies ministry said the fire had broken out over several floors of the red-brick Nevskaya Manufaktura building on the Oktyabrskaya Embankment of the Neva River.

Forty people had been evacuated, while two firefighters had been hospitalised and contact lost with another one, the ministry said.

The enormous factory, founded as a cloth manufacturer in 1841, was engulfed in flames, AFP journalists at the scene said.

The factory was nationalised and run as a state entity during the Soviet period, then privatised in 1992.

In recent years parts of the building continued to operate manufacturing cloth, while others were rented out as office space and some areas had been abandoned.

Tech-assisted Covid-19 tracking is having some issues

Harnessing today’s technology to the task of fighting the coronavirus pandemic is turning out to be more complicated than it first appeared. The first U.S. states that rolled out smartphone apps for tracing the contacts of COVID-19 patients are dealing with technical glitches and a general lack of interest by their residents. A second wave […]

ABS-CBN, a Leading Broadcaster in the Philippines and Target of Duterte’s Ire, Signs Off

MANILA — A leading media network in the Philippines was forced off the air on Tuesday, making it the first major broadcaster to have met such a fate during the administration of President Rodrigo Duterte, which is cracking down on news outlets that have been critical of his leadership. The government’s telecommunications commission issued ABS-CBN […]

LOS ANGELES: Nasa scientists on Friday presented striking early images from the picture-perfect landing of the Mars rover Perseverance, including a selfie of the six-wheeled vehicle dangling just above the surface of the Red Planet moments before touchdown. The color photograph, likely to become an instant classic among memorable images from the history of spaceflight, […]