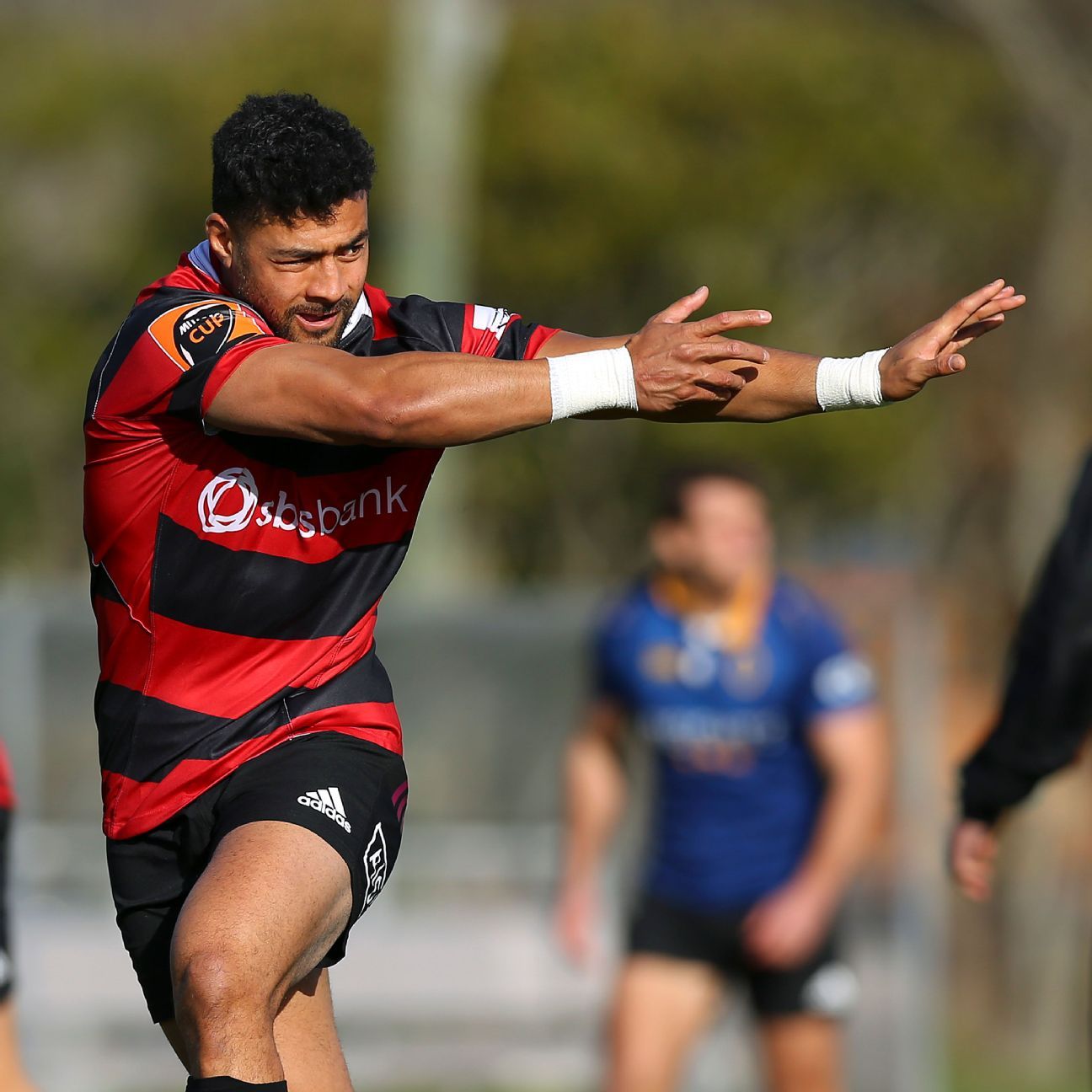 One of the great fixtures on New Zealand’s rugby calendar is at last again a reality, with the North Island vs. South Island game set to be played at Wellington’s Sky Stadium on Saturday evening [NZT, 3 a.m. ET].

The rugby season, like all other sporting competitions in 2020, was turned on its head as a result of the coronavirus pandemic. But it has afforded New Zealand the opportunity to do something different, first through its domestic Super Rugby Aotearoa tournament — won by the Crusaders — and now the return of the North vs. South match for the first time since 2012.

The two squads were selected on the basis of where they made their provincial debut, not where they first played rugby or represented their school at First XV level. That decision has resulted in the Barrett brothers, Beauden and Jordie, ending up on opposite sides of the paddock, but it also has ensured two evenly matched teams will lock horns in Wellington.

It remains unknown just what form Test rugby will take in the coming months, but there will at least be three Bledisloe Cup fixtures against Australia, making this North vs. South showdown a virtual All Blacks trial, just as it was during rugby’s amateur era.

Saturday’s match will be the 81st in the history of the North vs. South rivalry, but it will unfortunately be played before empty stands, after the New Zealand Government returned the country to Level 2 restrictions following a small resurgence in COVID-19 cases.

Read on as we look at some of the key players, matchups and storylines for coach Ian Foster, who is preparing for his first season at the helm of the All Blacks after an eight-year stint as Steve Hansen’s assistant.

Rugby fans in the United States can watch the North vs. South clash LIVE on ESPN+ from 3 a.m. ET Saturday or catch the replay later in the day.

WHITELOCK AND TUIPULOTU ARE YOUR STARTING LOCKS, BUT THEN …

Captains of the South and North teams, respectively, Sam Whitelock and Patrick Tuipulotu will also be the Foster’s first-choice lock combination for the All Blacks.

New Zealand will continue to feel the absence of Brodie Retallick, who was enjoying a two-year sabbatical in Japan before the COVID-19 pandemic hit, until the middle of next year, leaving Foster just a tad light on for depth in the crucial second-row position.

That means Mitchell Dunshea, Tupou Vaa’i, Manaaki Selby-Rickit and Scott Scrafton could each be in the running for an All Blacks call-up later this year; Vaa’i and Dunshea are certainly in the box seat given they will start on Saturday, but the other two should get a fair opportunity off the bench.

JUST WHAT KIND OF BACK-ROW COMBINATION DOES FOSTER WANT?

Sam Cane’s selection as All Blacks captain earlier in 2020 all but guarantees he will start at No. 7, providing he is fit and healthy, when the All Blacks eventually take to the field later this year. But just what kind of support Foster chooses at No. 6 and No. 8 to balance the back-row remains unknown.

Certainly Ardie Savea played a number of games for the Hurricanes at No. 8 during Super Rugby Aotearoa, while he started at No. 6 alongside Cane and former captain Kieran Read during the World Cup.

Savea starts at No. 7 for the North this weekend, giving breakout Blues No. 8 Hoskins Sotutu the chance to shine on his return from injury. Sotutu was in sparkling form for the Blues in Super Rugby, but then he really showed his all-round class in the opening weeks of Super Rugby Aotearoa.

Meanwhile for the South, Shannon Frizell looms as a key ball-carrier while also having a point to prove to Foster himself. Frizell burst onto the All Blacks scene in 2018, before falling off the pace and missing World Cup selection last year. But he was back to his best this season, making the third most runs of any forward in the competition, and sitting inside the top five for total offloads and tackles made.

A back-row of Savea, Cane and Sotutu would closely resemble what we saw from the All Blacks at last year’s World Cup, but a strong performance from Frizell for the South or even a resurgent Akira Ioane [North] will give Foster plenty to ponder ahead of Bledisloe I.

IS THIS REALLY A SHOWDOWN FOR THE ALL BLACKS NO. 10 JERSEY?

Robbed of a head-to-head battle when the closing game of Super Rugby Aotearoa between the Blues and Crusaders was cancelled because of an outbreak of coronavirus cases in Auckland, we at last get to see Richie Mo’unga and Beauden Barrett face off against one another. Sure, they were on the same paddock in Christchurch in early July, but given Barrett was at fullback and still clearly finding his feet as part of a new team, little could be gleaned as to who should wear the All Blacks No. 10 jersey later this year.

Certainly the circumstances are vastly different from an All Blacks perspective than what they were last year, when Barrett shifted to fullback to accommodate Mo’unga at 10. It’s fair to say that the All Blacks were short on form fullback options in 2019, but the case couldn’t be more different this season. Each of Will Jordan, Damian McKenzie and Jordie Barrett enjoyed strong Super Rugby Aotearoa seasons, with the latter two to start at fullback for the North and South respectively on Saturday.

And so Foster might not actually be fixing two problems with one move this season, and thus Saturday’s showdown at No. 10 carries significant weight. Mo’unga has played the better rugby for much of the past two years, but there is also the fact that Beauden Barrett was a two-time winner of World Rugby’s Player of the Year Awards as a fly-half.

Nobody doubts either player’s attacking brilliance, but questions remain as to their true ability to win Tests at the highest level by playing a more rounded fly-half game. Perhaps New Zealanders just need to admit that neither player is Dan Carter?

Whatever the case, this is the matchup we’ve been waiting for, and the player who dominates it will be hard to leave out when Foster names his first All Blacks starting XV — no matter what style of rugby he is planning to play.

LOST ON THE WING, RIEKO SEEMS REBORN AT OUTSIDE CENTRE

Rieko Ioane seemed to lose his way last year. After being arguably the best winger in the game since his Test debut against the British & Irish Lions, Ioane appeared to lose all confidence, as his attacking threat disappeared almost completely. In the end, he lost his left wing position to George Bridge.

But 2020 brought with it a change of position, and Ioane hasn’t looked back, adding his name to a list of midfield contenders that is overflowing in New Zealand, albeit without the injured Ngani Laumape.

The South’s outside centre Braydon Ennor is no slouch, either, and that means the South will field an all-Crusaders 10-14, which suggests there should be no issues with rhythm in the Southerners’ attack.

A quick look at the Super Rugby Aotearoa stats sheet paints a masterpiece for Will Jordan: first for tries; first for run metres; first for defenders beaten; and first for clean breaks.

Unfortunately, it wasn’t enough to earn him a start at fullback this weekend.

Jordan can be just as dangerous on the wing, and he will surely be named among the All Blacks back-three cohort come Sunday, but his selection in the No. 14 jersey opens up an opportunity for Jordie Barrett to really nail down the New Zealand fullback role.

While Barrett might not have had the same incredible Super Rugby Aotearoa return as Jordan, Barrett was superb in a Hurricanes team that got better as the tournament went on, upsetting the Crusaders at home along the way. Barrett also kicked several mammoth penalty goals, his long-range boot a huge advantage when it comes to Test selection.

And then there’s Damian McKenzie, who starts for the North this weekend and whose World Cup dream was cruelled by an ACL injury during last year’s Super Rugby season. McKenzie was a constant threat for the Chiefs, despite the fact they went winless in Super Rugby Aotearoa.

Saturday’s fullback battle is one of contrasting sizes and styles as a result, with Jordan hovering in open space for good measure too.

A strong performance could be enough to put either player in the All Blacks No. 15 jersey later this year — and perhaps condemn either Beauden Barrett or Mo’unga to the bench as a result.

Rugby fans have been looking forward to this one since it was first suggested early in the pandemic.

Just nine players across both starting sides are yet to make their Test debuts; some of those will likely do so later this year, while there is an abundance of rising talent on show too.

It looms as an incredibly close contest, but with the South having 11 Crusaders in their starting lineup, plus the quality additions of Jordie Barrett, Brad Weber and Shannon Frizell, the Southerners might just have the edge in terms of continuity and certainly familiarity, and that could be telling given the two playing groups only got together on Monday.

Rugby fans in the United States can watch the North vs. South clash LIVE on ESPN+ from 3 a.m. ET Saturday or catch the replay later in the day.

AC Milan striker Zlatan Ibrahimovic has tested positive for the coronavirus, the club confirmed on Thursday. The news was announced by the Serie A club in a short statement ahead of their Europa League game against Bodo/Glimt and Ibrahimovic posted on Twitter: “I tested negative to Covid yesterday and positive today. No symptoms whatsoever. COVID […]

FRISCO, Texas — The Dallas Cowboys released veteran safety Ha Ha Clinton-Dix on Thursday. In March, the Cowboys signed Clinton-Dix to a one-year, $3.75 million deal that included a $1.25 million signing bonus. The team also guaranteed $1 million of his $2.25 million base salary, but the move frees up $1.5 million in cap room. […]