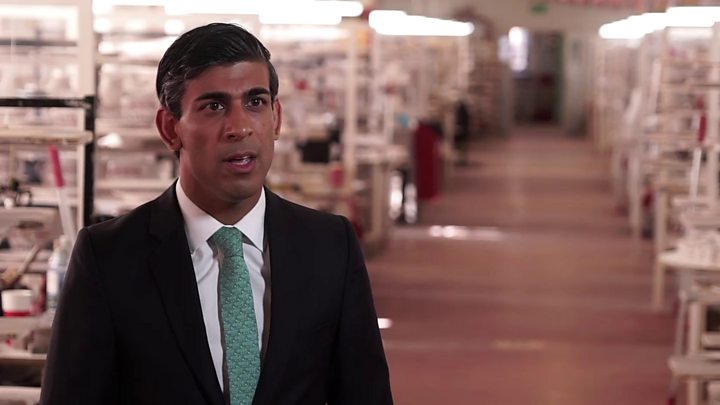 The chancellor has said looking for new ways to protect jobs is his “number one priority” after the unemployment rate hit its highest level in two years.

Rishi Sunak said finding innovative solutions was “top of mind” as figures showed unemployment rose to 4.1% in the three months to July, up from 3.9%.

Labour called for the furlough scheme to be replaced when it ends in October, warning joblessness could spike.

But the chancellor stressed this would not help people find new opportunities.

Mr Sunak acknowledged the furlough wage support scheme had worked, with more than half of the 9.6 million workers furloughed since May returning to work by mid-August.

But he told the BBC: “I wouldn’t be being honest with people if I pretended that it was always going to be possible for people to return to the job that they had.

“Now in terms of helping those people, I don’t think the right thing to do is to endlessly extend furlough.

“People don’t want to be at home, they want to be in work, and that’s why our plan for jobs is so important, because it helps provide people with new opportunities, going forward.”

Instead he said the government had cut taxes for business, offered targeted support to the hospitality industry, and launched a job retention bonus for firms that bring back staff from furlough.

At the job protection scheme’s peak in May, 30% of the workforce across the UK was furloughed. That figure fell to 11% by mid-August.

Earlier on Tuesday, employment minister Mims Davies also indicated that more targeted support for struggling sectors could be announced by the government.

“There will be sectors that take longer to come back – I don’t think this government is afraid of supporting where we can,” she said.

Is the Chancellor cooking up a new jobs scheme?

The furlough scheme was designed with a specific problem in mind – to keep people connected to jobs that would return after the pandemic peak passed.

Any future package would be concentrated on a different target – to help create new and replacement jobs, or to allow for short time work.

Number 11 is still sceptical about sectoral targeting. How do you deal with supply chains, for example, a media buyer who works in the aviation industry? Will cash be wasted on businesses that do not need support?

But the very facts that the chancellor pointed out to me in Stoke, that people are quite quickly coming off furlough, show that is less of a worry than might be thought. The ongoing generosity of such a scheme would have to be assessed in the light of the spending review, and high levels of government debt.

Something is cooking at the Treasury as it looks beyond furlough scheme.

Though it is not yet what might be referred to as “oven ready”.

What do the latest unemployment figures show?

Firms have continued to remove staff from payrolls as they prepare for the end of the furlough scheme on 31 October, the latest employment figures show.

About 695,000 UK workers have disappeared from the payrolls of British companies since March, when the coronavirus lockdown began, according to the Office for National Statistics (ONS).

Young workers have also been hard hit, with those aged 16 to 24 suffering the biggest drop in employment compared with other age groups.

Some 156,000 fewer young people were in employment in the three months to July compared to the previous quarter, the ONS said.

“Generation Z has been hit particularly hard by the economic fall out of the pandemic as the retail and hospitality sectors, which have taken such a battering, are often relied on to help school and university leavers find an entry-level job, and get started in the world of work,” said Susannah Streeter, a senior analyst at Hargreaves Lansdown.

“Sadly, this may not just be a bump in the road but could have long term consequences for the path of their careers.”

The government has launched a scheme called Kickstart to create work placements for unemployed young people. Employers will be paid £1,500 for every 16-24 year old they train.

How is the furlough scheme affecting employment?

The unemployment rate has risen slightly, but experts say it does not yet fully illustrate the full impact of the economic crisis on jobs, with the furlough scheme helping keep the numbers down.

The government’s Job Retention Scheme begins tapering off this month before ending on 31 October.

Under the scheme the government initially paid 80% of a person’s wages up to £2,500 a month.

Since the start of September, the state’s contribution has fallen to 70%, with employers expected to make up the remainder of pay.

What are the experts saying?

Darren Morgan, ONS director of economic statistics, said there had been some signs that the economy “reopened” in July as businesses including restaurants, pubs and hairdressers were allowed to trade again.

Job vacancies in the three months to August jumped by 30% to 434,000 – although this was still significantly below pre-virus levels.

However, Paul Dales, chief UK economist at Capital Economics research group, said he expected that “employment will fall more sharply and unemployment will increase more quickly as the furlough scheme continues to unwind and ceases at the end of October”.

What has the political reaction been?

Labour leader Sir Keir Starmer – addressing the TUC conference by video link, as he is self-isolating – called for an extension of part-time working as furlough comes to an end, with rewards for employers who keep people on, though he gave no detail of these rewards.

He also called for targeted support for vulnerable sectors such as hospitality and aviation.

He urged ministers to “outlaw fire-and-rehire tactics” where workers are made redundant, then taken back on worse terms.

How do those affected feel?

Orrean Jacob recently lost the job he had done for nine years, working at the Mini car factory in Oxford as an agency worker.

“They decided to let people go, and I was one of them,” he says. Hundreds of workers at the plant were affected.

“It really hurt. When you go to work, it’s not just about the money or pay. It’s about making something of yourself, making friends and making connections.”

Although he found himself in a similar position to many others during the pandemic, a phone call with a friend presented him with an opportunity. They recommended he get in touch with the HS2 rail project about their one-week training programmes.

By the end of the following week, he was fully licensed to be on-site and drive a forklift, having completed a course worth about £1,000 with one of HS2’s sub-contractors.

“This was just the push I needed in the right direction – to find something new, to find a new path to pursue because the other one clearly wasn’t working.”

Have you lost your job as a result of the coronavirus pandemic? Share your experiences by emailing .

Please include a contact number if you are willing to speak to a BBC journalist. You can also get in touch in the following ways:

If you are reading this page and can’t see the form you will need to visit the mobile version of the BBC website to submit your question or comment or you can email us at . Please include your name, age and location with any submission.

Image copyright UK Parliament/Jessica Taylor Image caption Parliament is on recess, with MPs set to return on 1 September A Conservative MP accused of rape has agreed not to return to the Commons until after his bail date in November. The party said the former minister would instead work from home when other MPs return […]

Image copyright Getty Images Image caption Sunday’s applause is inspired by the weekly Clap for Carers that took place during the coronavirus lockdown The prime minister will join a nation-wide round of clapping later to pay tribute to NHS staff on the 72nd anniversary of the health service. The public are being encouraged to give […]

Media playback is unsupported on your device Media captionSNP MP Alison Thewliss’ claims that forcing black people to work is a racist policy are rejected by Kemi Badenoch Systemic racial injustice in England is not the reason people from ethnic minorities are more likely to die from coronavirus, a minister has said. Kemi Badenoch said […]