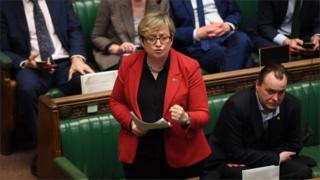 Joanna Cherry has ruled out standing for Ruth Davidson’s Holyrood seat in next year’s Holyrood election.

The SNP’s Edinburgh South West MP was planning on seeking support from her party to challenge for the Edinburgh Central constituency.

But Ms Cherry has said a rule change approved by the SNP’s governing body now means she would have to resign as an MP first.

Angus Robertson has already announced plans to bid for the candidacy.

Ms Cherry, who hit the headlines last year after successfully leading a legal bid to stop the UK Parliament from being suspended for five weeks, described the rule change as “unreasonable”.

She said: “It is unprecedented in our party’s history of dual mandates to demand that a parliamentarian make themselves and their constituency staff unemployed in order to be eligible to be a candidate.

“It is particularly unreasonable to demand this in the middle of a pandemic. I am not prepared to do it and so unless circumstances change, I won’t be seeking nomination for Holyrood in this election.”

Ms Cherry added that she thought she had a good chance of being selected as a candidate and, “members of Edinburgh Central had hoped that I would be part of a fair and open contest, but this decision makes that impossible.”

An SNP spokeswoman said: “The National Executive Committee backed an approach that will guarantee constituents a full-time commitment from day one, and minimise the disruption to voters.”

Image copyright Reuters The government has signalled it is set to take a tougher line against Chinese telecoms equipment-maker Huawei. A review is under way into how forthcoming US sanctions would affect the UK’s continued use of its products. “Given that these sanctions… are extensive, it is likely to have an impact on the viability […]

Image copyright 10 Downing Street Image caption The prime minister outlined changes to lockdown restrictions in England during an address to the nation last week Boris Johnson has acknowledged frustration over the “complex” easing of England’s coronavirus lockdown. The PM wrote in the Mail on Sunday that more complicated messages were needed during the next […]

Image copyright Getty Images An ex-Labour peer has been warned he faces a “severe sanction” if he does not change his behaviour after a number of harassment complaints. Lord Stone of Blackheath was ordered to undergo “behaviour change coaching” after four women had complaints against him upheld in October last year. Two more women came […]