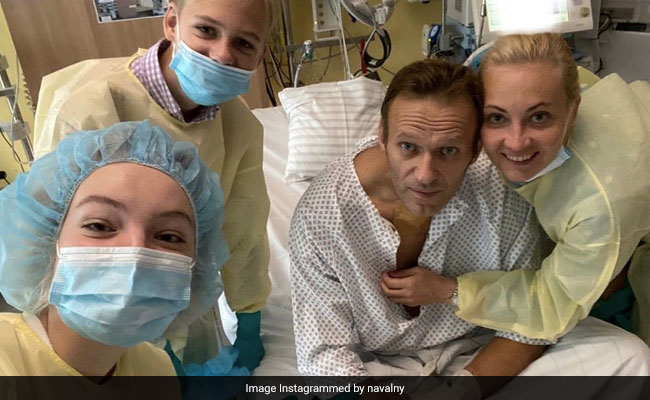 Britain said on Wednesday that Russia had a case to answer over the poisoning of Alexei Navalny as it was almost certain that Russian intelligence services carried out the attack with a Soviet-developed chemical weapon known as Novichok.

Foreign Secretary Dominic Raab, speaking in Washington alongside Mike Pompeo, said he welcomed Navalny’s recovery but that Russia had a case to answer as the use of a chemical weapon was unacceptable.

“The Russian government is duty bound to explain what happened to Mr Navalny,” Raab said.

“From the UK’s point of view, very difficult to see any plausible alternative explanation to this being carried out by the Russian intelligence services, but certainly the Russian government has a case to answer,” Raab said.

Navalny shared a photograph from a Berlin hospital on Tuesday, sitting up in bed and surrounded by his family, and said he could now breathe independently after being poisoned in Siberia last month.

The leading opponent of President Vladimir Putin, fell violently sick while campaigning on Aug. 20 and was airlifted to Berlin.

Germany says laboratory tests in three countries have determined he was poisoned with a Novichok nerve agent, and Western governments have demanded an explanation from Russia.

Moscow has called the accusations groundless.

Lawmakers and White House officials remain at an impasse on a new relief package. With coronavirus cases soaring across the United States, the debate in Washington over a new relief package to help people and businesses weather the crisis is set to take center stage in the coming week, and negotiators were meeting over the […]

How Europe coexists with the coronavirus Having abandoned hopes of eradicating the virus or developing a vaccine quickly, Europeans have largely gone back to work and school, leading lives as normally as possible even as the possibility of a second wave haunts the Continent. Europeans are putting to use the lessons from the pandemic’s initial […]

People wait in a line to watch Phantom of the Opera as the spread of the coronavirus disease (COVID-19) continues, at a theatre in Seoul, South Korea, June 18, 2020. REUTERS/Daewoung Kim South Korea reported 197 new cases on Monday, taking its total to 15,515, its fourth consecutive day of triple-digit increases after several weeks […]