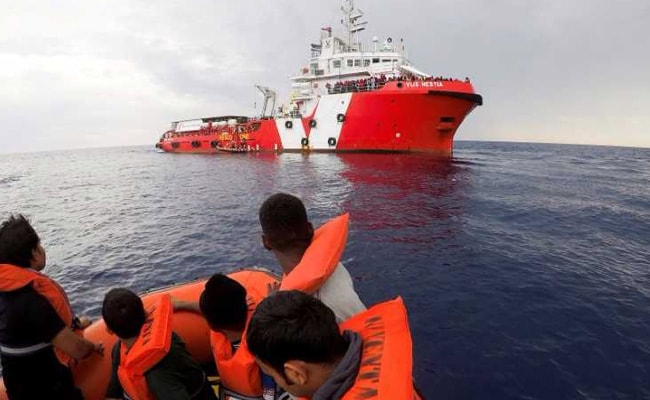 Around 100 migrants fleeing war-ravaged Libya have run into difficulty in the Mediterranean and could drown, the UN said Monday, urging a rapid rescue.

The arrival of summer and more favourable conditions at sea tends to lead to an increase of attempts to cross the Mediterranean, and the deteriorating situation in Libya is also prompting more migrants to take their chances at sea and reach Europe.

The International Organization for Migration warned in a tweet that “around 95 migrants are still floating in the Central Mediterranean at risk of drowning, after attempting to flee Libya.”

The UN agency did not provide any further details, but stressed that “states and shipmasters have a moral and legal obligation to respond to distress cases at sea.”

More than 100,000 migrants tried to cross the Mediterranean last year with more than 1,200 dying in the attempt, according to the IOM.

Tens of thousands of refugees and asylum seekers, as well as sub-Saharan African and Asian migrants hoping to make it to Europe, have found themselves stranded in Libya in horrifying conditions.

The overthrow and killing of veteran dictator Moamer Kadhafi in a NATO-backed uprising in 2011 sparked years of chaos that traffickers have exploited to turn Libya into a key route for illicit migration to Europe.

The situation of refugees and asylum seekers became more critical after eastern military strongman Khalifa Haftar launched an assault on Tripoli in 2019, and was further compounded by the coronavirus pandemic.

Migrant departures from Libya’s coast increased by nearly 300 percent this year between January and the end of April, compared to the same period in 2019, according to the UN.

A woman wearing a protective mask lines up outside a liquour shop in Bangkok, Thailand. (Image: Reuters) Some 40 million tourists were expected to arrive in the kingdom this year but the travel industry was the first casualty when pandemic lockdowns went into effect globally in March. AFP Last Updated: August 17, 2020, […]

New York City’s health commissioner, Dr. Oxiris Barbot, resigned on Tuesday in protest over her “deep disappointment” with Mayor Bill de Blasio’s handling of the coronavirus outbreak and subsequent efforts to keep the outbreak in check. Her departure came after escalating tensions between City Hall and top Health Department officials, which began at the start […]

This Chef Has a Michelin Star and a Mission: Feeding Millions in India’s Lockdown

NEW DELHI — He has cooked for the Obamas, hosted TV shows with Gordon Ramsay, written 25 culinary books and created sumptuous meals that cost nearly $40,000 each. But in the past two months, Vikas Khanna, a Michelin-starred chef, has turned his focus to India’s hungry, providing millions of meals to poor Indians who have […]