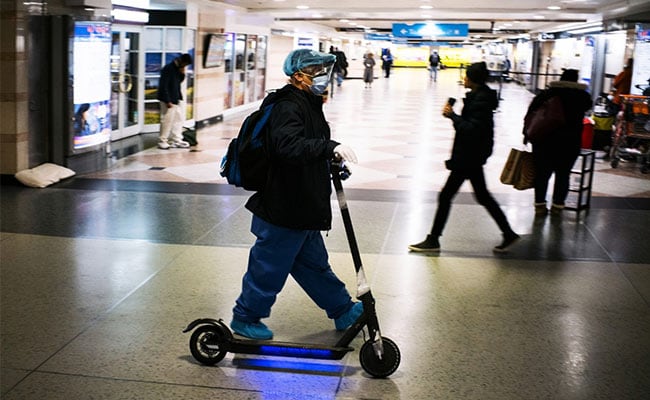 US cases of the novel coronavirus crossed 8 million on Thursday, rising by 1 million in less than a month, as another surge in cases hits the nation at the onset of cooler weather.

Since the pandemic started, over 217,000 people have died in the United States.

The United States reported 60,000 new infections on Wednesday, the highest since August 14, with rising cases in every region, especially the Midwest.

Health experts have long warned that colder temperatures driving people inside could promote the spread of the virus. They have not pinpointed the reason for the rise but point to fatigue with COVID-19 precautions and students returning to schools and colleges.

According to a Reuters analysis, 25 states have so far set records for increases in new cases in October.

All Midwest and Northeast states have reported more cases in the past four weeks than in the prior four weeks, with the number of new cases doubling in states like Wisconsin, South Dakota and New Hampshire.

In the Midwest, daily new cases hit a record on Wednesday with over 22,000 new infections. The positive test rate tops 30% in South Dakota and 20% in Idaho and Wisconsin.

“We have now surpassed 1,000 COVID-19 patients who are in the hospital. In some regions of our state, our ICU beds are 90% or more full. Over the course of the past six weeks, our average daily deaths have more than tripled,” Palm added.

California remains the state with the most total cases followed by Texas, Florida, New York and Georgia. Those five states account for over 40% of all reported COVID-19 cases in the nation.

With both cases and positive test rates rising in recent weeks, New York City has closed businesses and schools in neighborhood hot spots despite protests from a small contingent of Orthodox Jews.

In addition to rising cases, hospitals in several states are straining to handle an influx of patients.

In the Midwest, COVID-19 hospitalizations hit a record high for a tenth day in a row on Wednesday. Nationally, the United States reported nearly 37,000 hospitalizations, the highest since Aug. 28.

Wisconsin, which reported record hospitalization on Wednesday, has opened a field hospital outside of Milwaukee to handle COVID-19 patients.

Malala Yousafzai, the 22-year-old Pakistani activist and youngest recipient ever of a Nobel Peace Prize, graduated from Oxford University, she said on Friday. And if one wonders what comes next for one of the world’s most famous girls’ education advocates, Ms. Yousafzai, who shared the Nobel Peace Prize in 2014, says she doesn’t know. But […]

DAKAR, Senegal — The prime minister of Ivory Coast, a candidate for president in a coming election, died suddenly, the country’s president announced on Wednesday. The death of Prime Minister Amadou Gon Coulibaly, 61, cast uncertainty on the West African country’s presidential election in three months, in which he was to be the ruling party’s […]

File photo of Scott Morrison, the PM of Australia. (Reuters) Morrison said he had consulted with the parliamentary opposition and had asked the speaker to postpone the two-week session. As the request is largely a formality, lawmakers are expected to meet in the capital Canberra on Aug. 24 instead of Aug. 4. Reuters Last […]