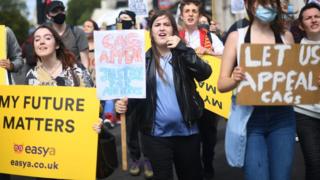 The U-turn in this summer’s exams in England became unavoidable, as numbers challenging grades would have overwhelmed the appeals system, said Education Secretary Gavin Williamson.

Facing questions from MPs over the exams fiasco, he defended the principle of using calculated grades, but said too many “inconsistencies” emerged.

With head teachers warning that schools might have to send home pupils because of delays with testing, Mr Williamson said he had met Baroness Harding, head of the test and trace system, to emphasise that testing for schools had to be a “priority”.

Schools can now order replacement testing kits, he said, after they were sent an initial batch of 10 per school.

But he would not commit to a “48-hour guarantee” for turning around test results, as suggested by Education Select Committee chairman Robert Halfon.

The education secretary was giving evidence to MPs about the chaos surrounding this summer’s A-level, GCSE and vocational exams.

Mr Williamson said that when the decision to cancel exams was taken in March, there was a need for “certainty” – and it was not feasible to plan for conventional exams, which might later have to be scrapped.

He stood by the decision to use calculated grades instead – saying they were fairer for pupils from disadvantaged backgrounds – but said the problems and errors emerged when results were issued.

“The reality was there were too many inconsistencies in terms of the grades. That was one of the real challenges – and that lead to a lack of public confidence in the awarded grades,” he told MPs.

There had been confusion over a decision to allow appeals to be made over mock test results – with the exam regulator Ofqual publishing rules for how this would work and then taking them down the same day.

Mr Williamson denied that he had ordered this – saying that he had wanted changes, but it had not been his decision to remove the guidance.

The volume of appeals that would have been expected from allowing the use of mock test results was such that the appeals system would not have been able to cope, he told MPs.

“What became increasingly clear,” he said, “was that an appeals system now, no matter how robust, no matter how wide, how open was not going to be sufficient to address the number of youngsters applying”.

And in response, in a major U-turn, results were then switched to the “centre assessment grades” submitted by schools, with mock tests being ditched for appeals.

“Pupils, teachers, parents and taxpayers deserve better answers than this,” he said. The responses to the committee did not really explain “what went wrong with the grading process this summer”, said Mr Barton.

Questioned on blurred lines of responsibility and accountability between ministers and Ofqual, the education secretary emphasised that Ofqual was not subject to his oversight.

“Ofqual is most clearly very independent,” he said.

He also refused to be drawn into questions over whether Ofqual “got it wrong” in their approach to awarding exams, instead offering praise for Sally Collier, the chief regulator, who resigned following the exams crisis.

In terms of recognising early warnings that there could be problems with the algorithm system – Mr Williamson said the Department for Education did not get any detailed view of results until the week they were published.

But he also suggested he would not be able to share with MPs a briefing about the exams given to officials at 10 Downing Street a week before results were published.

Asked whether Ofqual’s reputation had been badly damaged, he said: “What we both failed to recognise was the fact that we weren’t in peace time.

“But we were in a very different situation in terms of the global pandemic.”

And the education secretary refused to be drawn into questions about whether his most senior civil servant had resigned due to providing unsatisfactory advice.

Asked about next year’s exams, Mr Williamson said it was “vital and so important that we get the exams series up and running for 2021”.

“I have repeatedly told Parliament that we are going ahead with exams next year,” he said.

His department was planning for a potentially different approach that could see “extra capacity within schools and a wider use of public buildings for exam sectors”, he added.

Coronavirus: What happens when the furlough scheme ends?

Image copyright Getty Images More than nine million workers who are unable to do their job because of the coronavirus outbreak have had their wages paid by the government. The furlough scheme was designed to help people put on leave because of the outbreak, and prevent mass redundancies. Firms start paying towards the scheme from […]

Image copyright PA Media A motion of no confidence in the Scottish Labour leader Richard Leonard has been withdrawn. Mr Leonard had been expected to face a vote at a meeting of the party’s governing body on Saturday. The motion was submitted after four Labour MSPs called for his resignation last week, citing poor election […]

Image caption The former employees who went public with their concerns were accused of undermining Jeremy Corbyn’s leadership A defamation case brought by ex-Labour employees against the party is expected to be settled in the High Court later. Labour is being sued by seven whistleblowers who appeared on a BBC Panorama programme last year criticising […]