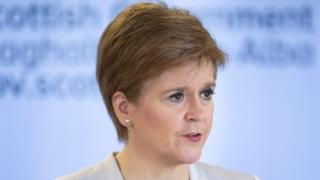 Nicola Sturgeon is set to outline plans to ramp up testing for coronavirus.

The first minister will insist that Scotland has already successfully increased testing capacity.

But she will say a new effort is required to get ready for the next phase in tackling the virus.

UK Health Secretary Matt Hancock is also due to announce whether his pledge of 100,000 tests a day has been met – with a government source telling the BBC it was “fairly confident”.

That target of having the capacity for 3,500 tests per day in Scotland has been met – although there have been reports that far fewer than that are actually being carried out.

While all frontline NHS workers, social care staff and care home residents are eligible to be tested in England, regardless of whether they have symptoms, it is only those who are suspected of having the virus in Scotland who are being tested.

And in England, anyone over the age of 65 who is displaying symptoms of the virus is eligible to be tested, regardless of their circumstances.

This is not yet the case in Scotland, where over-65s with symptoms are only tested if they fall under one of the other categories – for example if they are a hospital patient or care home resident.

Scottish Care has called for a “significant” increase in the number of tests being carried out in care homes.

The industry body wants all residents and staff to be tested as soon as any coronavirus case is found in a home.

The first minister is also expected to be be challenged over whether private tests in Scotland take the overall total to the near 10,000, which could be seen as a proportionate share of the UK total.

On Tuesday, the first minister announced that all patients over 70 who are admitted to hospital for any reason will now be tested for Covid-19.

She also said there had been “steady progress on increasing testing capacity” over the past month.

Media playback is unsupported on your device Media captionDavid Cameron said he has “misgivings about what is being proposed” David Cameron has become the fifth former prime minister to criticise a new bill attempting to override the Brexit withdrawal agreement. The Internal Market Bill will come before MPs later, with the government calling it an […]

Brexit: Reputation of UK is being damaged in serious way – Simon Coveney

Irish Foreign Minister Simon Coveney has said that the reputation of the UK is being damaged by the British government’s actions in relation to Brexit negotiations. Mr Coveney told the BBC’s Andrew Marr that the EU had remained consistent, and the UK was the only side threatening to break international law. Source link 60 SHARES […]

Media playback is unsupported on your device Media captionBoris Johnson says schools are the “last thing” the government wants to close as part of any local lockdown restrictions It is understandable that there is “anxiety” over exam grades, the prime minister has said, as pupils prepare to receive estimated results this week for tests cancelled […]