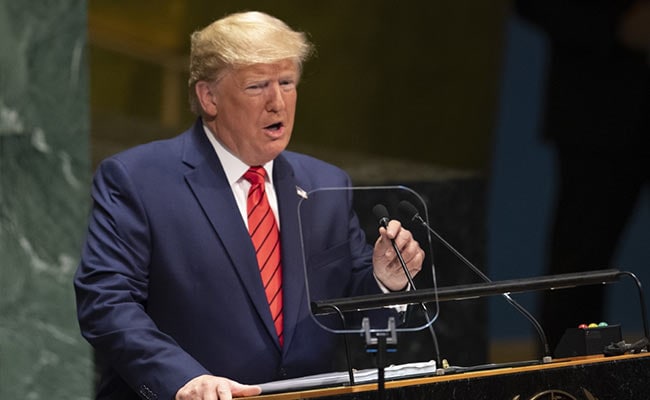 US President Donald Trump is likely to travel to New York to attend the annual UN General Assembly session in September, the only world leader to address this year’s virtual high-level week in person, the US envoy to the UN said.

Ms Craft said that with the UN commemorating its 75th anniversary this year, “that makes it even more special that we really take the virtual and amplify it to be able to celebrate the 75th and obviously we’re going to be focused on human rights issues, on transparency, accountability because anytime during COVID where the American taxpayers have really stepped up on a personal level, it’s now.”

For the first time in the UN’s 75-year history, the annual General Assembly session will be held virtually and heads of state and government will not be physically attending the annual gathering due to the coronavirus pandemic.

US is the host country of the United Nations and there is a possibility that President Trump could travel to New York to address the General Debate of the 75th session of the Assembly on September 22.

The US is traditionally the second speaker at the debate after Brazil. This would be President Trump’s final address to the General Assembly of the first term of his presidency before the US heads into elections in November and he could use the UN platform to highlight his foreign policy achievements while also tout his campaign agenda.

In taking the decision for a virtual UNGA, the General Assembly had noted “with concern” the situation regarding the coronavirus pandemic and the “limitations recommended on meetings within the United Nations premises as precautionary measures aimed at containing the spread of COVID-19.”

The new format will mean that it will be for the first time in the world organisation’s 75-year history that heads of state and government and ministers will not gather here for the high-level week that annually brings thousands of diplomats, government officials, civil society members and media persons from around the world to New York City.

Addressing a virtual press conference in June, General Assembly President Tijjani Muhammad-Bande had said that world leaders cannot come to New York for the annual UN General Assembly session in September because of the COVID19 pandemic.

“World leaders cannot come to New York because they cannot come as single individuals. A president doesn’t travel alone. We don’t expect therefore to have presidents here,” Muhammad-Bande had said.

Farhan Haq, Deputy Deputy Spokesman for the Secretary-General, responding to a question on President Trump addressing the UNGA session in person, said that the UN Secretariat will be in touch, through the Office of the President of the General Assembly, with the member states on their representation.

Trump and first lady test positive for the virus.

President Trump said early Friday that he and his wife, Melania, had tested positive for the coronavirus, throwing the nation’s leadership into uncertainty and escalating the crisis posed by a pandemic that has already killed more than 207,000 Americans and devastated the economy. “Tonight, @FLOTUS and I tested positive for COVID-19,” Mr. Trump wrote on […]

Something Close to Genocide in China’s Xinjiang, They’re Shaving Heads of Uighur Women for Hair Products: US

The US national security adviser said on Friday that China was perpetrating “something close to” a genocide with its treatment of Muslims in its Xinjiang region. “If not a genocide, something close to it going on in Xinjiang,” Robert O’Brien told an online event hosted by the Aspen Institute, while highlighting other Chinese crackdowns including […]

WASHINGTON: A day after President Donald Trump fired Defense Secretary Mark Esper, three staunch loyalists to the president were named to top defense jobs. Among them was a former Fox News commentator who failed to get through Senate confirmation because of offensive remarks he made, including about Islam. The abrupt changes sent reverberations through the […]