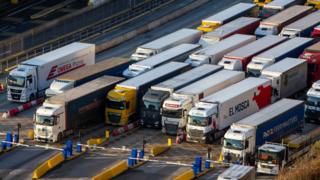 The government has denied claims that a new freight management system will not be ready when the EU transition period ends.

The system is seen as vital for preventing delays when post-Brexit freight arrangements come into place on 1 January.

One industry body had expressed concern that only a beta – or test – version would be available.

But the government insists it is a fully operational digital service.

The so-called Smart Freight system ensures that trucks are carrying the correct documentation before they travel to ports.

The new system is designed to reduce delays at ports, and to better manage traffic into Dover and queues of lorries building up along the M2 and M20 motorways in Kent.

Truck drivers could face a fine if they arrive at ports without the proper documentation, but the government insists this will be a last resort, and unnecessary if they follow the rules.

Logistics UK, which represents freight businesses, said it was informed by government officials on Monday that a beta – or test – version would be available in December, but would not be fully operational until April.

In a statement, the Director of Policy at Logistics UK Elizabeth de Jong said it was unacceptable and a “massive blow to UK businesses and the economy”.

But the government now says “beta” is a standard labelling practice for a digital service that is fully operational, and that it has reassured industry that Smart Freight will be operational by December.

Image copyright PA Media Image caption The new look of shopping in Belfast as face coverings become mandatory It is now compulsory to wear a mask in shops and other enclosed public spaces in Northern Ireland. The decision was taken by ministers last week as part of efforts to suppress coronavirus. Infections in NI have […]

Boris Johnson: Virus 'isn't all over'

Image copyright Getty Images The government is launching a new initiative to help UK travellers heading to the EU after the Brexit transition period ends in December. Anyone booking a European trip for 2021 will be urged to visit a dedicated web page. From January, the UK will no longer be following EU rules and […]