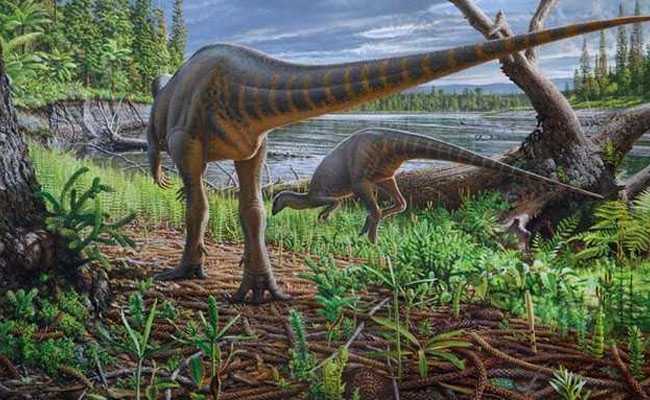 Climate Change Devastated Dinosaurs Not Once, But Twice. (Representational)

Most people know that land-dwelling dinosaurs were wiped out some 66 million years ago when an asteroid roughly twice the diameter of Paris crashed into Earth.

If the explosive fireball didn’t get them, the plunge in global temperature on a planet with little or no ice — caused by a blanket of heat-shielding debris in the atmosphere — did.

What most people don’t know is that more than 100 million years earlier, another climate change cataclysm devastated a different set of dinosaur species, with many going extinct.

Except this time, it was global warming rather than global cooling that did them in, with the planet heating up more quickly than the dinos’ capacity to adapt.

Scientists have found evidence of this traumatic event some 179 million years ago in plant fossils in Argentine Patagonia.

The species, called Bagualia alba, is in the family of massive, long-necked sauropods, the largest animals to walk the Earth.

Before the global warming event, sauropods were only one branch of the Sauropodomorpha lineage.

Other dinosaurs in the same group were smaller and lightly built, with some no bigger than a goat, according to a study published Wednesday in the Royal Society.

But a series of volcanic eruptions over several million years released huge amounts of CO2 and methane in the atmosphere, warming the planet and transforming the vegetation dinosaurs fed on.

The climate went from a temperate, warm and humid with a diverse lush vegetation to a strongly seasonal, hot-and-dry regime.

Smaller Sauropodomorpha dinosaurs were unable to cope with the change, but larger sauropods – like the Bagualia alba — thrived.

“Sauropods are massive, four-legged animals with long necks,” which meant they could reach the tops of trees, palaeontologist and lead author Diego Pol told AFP.

“Their very robust mandibles and spoon-shaped teeth were adapted to feed on all kinds of plants such as conifer trees.”

Conifers in the early Jurassic had tough and leathery leaves that would be a challenge for any herbivore.

But that gave B. alba an advantage over other Sauropodomorpha dinosaurs, said Pol, head of the science department at the Egidio Feruglio palaeontology museum in Patagonia.

Sauropods’ new diet saw them expanded in size from 10 metres to 40 metres in length, as large digestion chambers were needed to cope.

They became the dominant group of herbivores and eventually the largest animals to ever walk the Earth.

Where in the U.S. the virus is under control As of this week, coronavirus cases are rising in 41 American states, and in many regions the situation has never been worse. Hospitalizations are nearing a record national high and deaths are the highest they have been since late May. But amid this devastating wave, one […]

Lara Trump is married to the president’s second-eldest son Eric. Washington, United States: US President Donald Trump’s daughter-in-law Lara is considering a Senate run in her home state of North Carolina in 2022, US media reported Thursday. The reports, in the New York Times and Politico, come as Donald Trump continues seeking to reverse his […]

Mark Zuckerberg said Facebook would add tags to posts that are “newsworthy” but violate platform rules. Washington: Facebook said Friday it would ban a “wider category of hateful conduct” in ads as the embattled social media giant moved to respond to widening protests over its handling of inflammatory posts. Chief executive Mark Zuckerberg also said […]