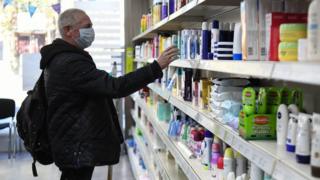 When the lockdown first started in the UK in the final week of March there was widespread support for the measures aimed at controlling the coronavirus. But have attitudes changed or do people still support the ongoing restrictions?

The country will soon enter its sixth week of the greatest curbs on daily life since World War Two.

But many, according to the most recent polling data, say they would be uncomfortable leaving home even if the government ordered the lifting of the restrictions in a month’s time.

More than 60% would be uncomfortable about going out to bars and restaurants or using public transport, should ministers decide to relax the lockdown, a survey for Ipsos Mori suggested.

More than 40% would still be reluctant to go shopping or send their children to school and more than 30% would be worried about going to work or meeting friends.

The vast majority of people in the UK are obeying the lockdown rules – not because they have been ordered to by the government but because they don’t want to catch or spread the virus.

Responses to a series of surveys over the last month suggest the country has gone from apprehension at the start through to dejection as the economy shrank and the death toll mounted. People have moved on to frustration in the most recent analysis as restrictions begin to grind and reality dawns as to how long they may last.

There is no question that lockdown places a significant strain on households, but is the increasing frustration and boredom translating into exasperation? Are we reaching the point where people will start to ignore the rules?

Some newspapers and politicians have been suggesting the social distancing restrictions are beginning to fray, but the evidence points to a high level of compliance remaining.

There have been reports of a slight increase in numbers using their cars, but it is not clear what the reason for that might be. In part, it may be because more businesses are finding ways to open up and people are returning to work.

Analysis of surveys conducted by King’s College in London suggests there are three broad groups when it comes to lockdown: accepting, suffering and resisting.

Just under half of people – 48% – are characterised as accepting, following the rules and coping reasonably well. At 44%, slightly fewer say they are struggling, often losing sleep, feeling anxious or depressed, but still overwhelmingly trying to obey all the rules.

The remaining 9% are resistant to the lockdown, with many of those believing too much fuss is being made about the virus and admitting they are less likely to follow the restrictions.

People tend to think social isolation will be most difficult for older people, but the survey evidence suggests the opposite is true. A survey conducted for insight company Britain Thinks finds 42% of 18-24-year-olds say they were not coping with lockdown, more than twice the proportion of those aged over 65.

Older people, of course, are likely to have seen less of a change to their lifestyle than the young. Their housing and income are likely to be more secure. Their social lives are less about going out to crowded bars and clubs, festivals and sports events.

Women appear to be struggling more than men in lockdown, perhaps a consequence of the tendency for them to take on a greater share of domestic responsibilities.

Unsurprisingly, poorer people are finding it tougher than those on higher incomes.

About 20% of people are worried about their mental health in lockdown, with 11% concerned about anxiety and 7% with concerns about depression, according to a survey conducted for the Academy of Medical Sciences and the mental health research charity MQ.

The behavioural science that forms part of the government’s thinking on the lockdown warned before the restrictions came in that people would struggle to stick to the rules for prolonged periods.

However, experts have been struck by how compliant the British public have remained.

Other countries, notably the US, have seen very public rebellions against the restrictions, but here the call to stay home to protect the NHS and save lives seems to have been greeted with very widespread and consistent support.

Image copyright Getty Images Lockdown led to an increase in fly-tipping as people struggled to access tips and waste collection, MPs say. Conservative MP Paul Bristow said the illegal dumping of waste had become more acceptable as people carried out “copy-cat” offences. He is calling for an increase in the penalties for fly-tipping. Environment Minister […]

Tony Blair: We will need to learn to live with coronavirus

Image copyright PA Media The coronavirus will not be eliminated and people will have to learn to live with it, Tony Blair has warned. The former Labour PM said the UK required more “containment infrastructure” in case the virus resurges in the autumn. His think-tank has recommended widespread mask-wearing to prevent a spike in cases […]