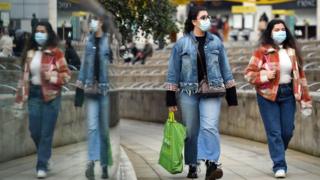 The new system of local coronavirus measures is “fundamentally flawed”, the mayor of Greater Manchester has said.

A three-tier system for England was announced on Monday, with the Liverpool region being placed in the highest level, with far stricter restrictions.

Andy Burnham told the BBC he “resisted” Greater Manchester being placed in the same category because it would cause “certain harm” to the economy.

Each level of restrictions is imposed after talks with local leaders.

Every area in England is categorised as on medium, high or very high alert under the system.

Meanwhile, Essex, which is currently in the medium tier, has become the first place to call for extra restrictions.

The county said it should be moved to high alert to prevent “further escalation” into the very high tier later, leading to damage to the economy.

And in London, the mayor Sadiq Khan has said that it is inevitable the capital will pass a “trigger point” in the next few days that should move the city from the medium level to the high level.

The move would see nearly nine million people banned from mixing with other households indoors, including in pubs and restaurants.

He added: “And they’re trying to pressurise people into tier three, even though it will do certain harm to those economies, often quite fragile economies in the north.

“That is why tier three as currently constructed is fundamentally flawed and why we have resisted being pushed into it.”

Manchester does not have Covid hotspots to the same degree as Liverpool, which is the only area to be placed in the highest tier, and the number of people admitted to hospital is lower, Mr Burnham said.

And he said England’s chief medical officer, Prof Chris Whitty, had acknowledged he was not confident the base tier three measures “would be enough”.

Mr Burnham said that he would prefer a short “circuit-break” national lockdown to “reset things”, including putting the Test and Trace system under local control. It was revealed on Monday that the government’s scientific advisers had called for a short lockdown of this kind last month.

A modern browser with JavaScript and a stable internet connection is required to view this interactive.

Recommendations over which areas are placed in particular Covid alert levels are made at a series of daily and weekly meetings involving NHS Test and Trace, Public Health England, the chief medical officer, the Department for Health and Social Care and ministers, along with the Joint Biosecurity Centre.

A final decision is only made after consultation with local authorities and local leaders.

Under tier three, or the very high alert level, these talks also decide any additional measures that are deemed necessary to bring the infection rate under control.

But Liverpool mayor Steve Rotherham said it was “totally false” that the new measures had been agreed to locally and that they had been “dictated to us by the government”.

What are the restrictions?

Most places are under the lowest tier, the medium alert level, with current restrictions continuing, including the 10pm hospitality curfew and the rule of six.

Areas already under additional local restrictions are automatically in the high alert level, which means bans on household mixing indoors are extended to include hospitality venues.

The very high alert level – at a minimum – sees pubs and bars close if they do not serve “substantial meals”, almost all household contacts banned and advice against travel. The rule of six will continue to apply in outdoor public spaces such as parks.

In Liverpool City Region, betting shops, gyms, leisure centres and casinos are also being closed as part of additional measures.

Essex is calling for its 1.4 million residents to be placed on the high alert level after its director of public health warned the increase in cases would continue to accelerate without urgent action.

Council leader David Finch said they wanted “above all” to avoid the economic damage of being placed in the highest tier of restrictions at a later stage.

“Making these painful decisions now will, we hope, bring dividends later,” he said.

‘Rishi Sunak: We need help with rent, money and jobs’

Young people across the UK have had their work, studies and lives upended because of the coronavirus pandemic. Many are working from home, while others have been furloughed or even made redundant. There could be more than one million young workers who are without a job, if the overall UK level of unemployment goes up […]

A support group for people who have lost loved ones to Covid-19 is calling on Boris Johnson to hold an immediate public inquiry into the pandemic. Lobby Akinnola and Leigh Morgan Jones of Covid Bereaved Families for Justice say it’s vital that lessons are learned, and applied in the event of a second wave of […]

Image copyright PA Media It is “vitally important” children go back to school, with the life chances of a generation at stake, Boris Johnson has said in a message to parents. As schools in England, Wales and Northern Ireland prepare to reopen, the PM said the risk of contracting coronavirus in one was “very small”. […]