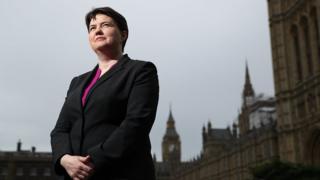 Former Scottish Conservatives leader Ruth Davidson is to be appointed to the House of Lords.

Ms Davidson has accepted the peerage and confirmed that she would continue as the constituency MSP for Edinburgh Central until March 2021.

She will only take up her seat in the House of Lords after her term in Holyrood ends.

She said at the time the idea of spending long periods away from her young son filled her with “dread”.

Following the announcement of the peerage, she said: “I am honoured to follow in the footsteps of former Holyrood parliamentarians such as Jack McConnell, Jim Wallace and Annabel Goldie in being nominated for membership of the House of Lords.”

“As a chamber dedicated to scrutinising and revising legislation, the upper house is stronger when it includes a range of voices with experience from different jobs, backgrounds, specialities and parliaments across the UK, and I believe I can make a contribution to its work.

“However, my main focus continues to be my Edinburgh Central constituency and I have confirmed that I will only take my seat after I cease to be an MSP in March.”

Commenting on the confirmed list of peerages, SNP MP Pete Wishart said: “It’s the worst kind of cronyism that only highlights the rotten Westminster system that is detached from reality.

“It’s clear beyond doubt that Westminster is simply not working for Scotland and that it is acting against our interests. The House of Lords needs to be abolished – not filled further to the brim at the taxpayers’ expense.”

Mr Ross is widely seen as the favourite to succeed Mr Carlaw, who was in the role less than six months, and if chosen would stand for election as an MSP in next May’s Holyrood elections.

Ms Davidson agreed to stand in for him at First Minister’s Questions until then, if he becomes leader.

In an interview in The Sunday Telegraph’s Stella Magazine in December, she hinted she could make a bid to lead the UK party – perhaps re-entering politics when the Conservatives are in opposition at Westminster.

She said: “It may well be that my time in politics doesn’t come again until we’re in opposition.

“I’ve probably got more experience than anyone in the party on how to lead from opposition.”

Last year, Ms Davidson was at the centre of controversy after she accepted a “contentious” job with a lobbying firm.

Some opposition politicians said it was a conflict of interest and in October she said she would not take the job.

Gambling in football: Betting sponsorship on shirts should be banned – Lords report

10 clubs in the Premier League are currently sponsored by gambling firms Premier League clubs should not be allowed to have betting firms on their shirts, a House of Lords Select Committee report has recommended. The cross-party committee, set up to look at the impact of the United Kingdom’s gambling industry, also says such sponsors […]