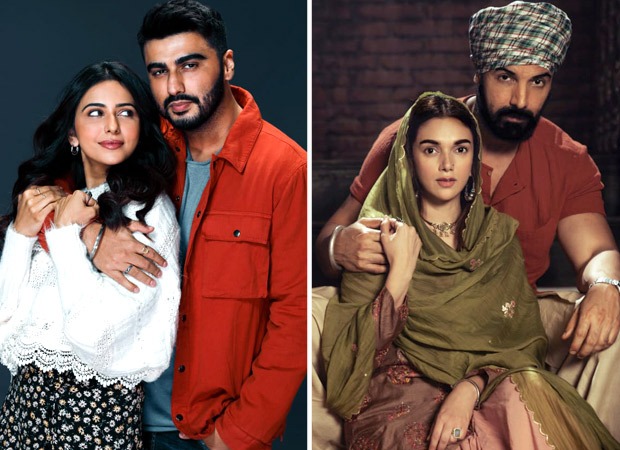 Arjun Kapoor hasn’t given hits in a while but the industry hasn’t lost faith in him and his talent. He has some interesting films in his kitty and one of them is the cross border love story, co-starring Rakul Preet Singh. Directed by debutant Kaashvie Nair, the film has caught the attention of the industry and the trade thanks to the concept and casting. The film went on floors without a title and there were rumours that it has been named Chale Chalo. But it turned out to be false news.

However, it has now been learnt that this upcoming movie has been titled. A source spills the beans, “The film is called Sardar & Grandson. The makers of the film feel it’s an apt title considering the film’s plot. Everyone in the unit is happy with this name and is looking forward to completing it and releasing it at the apt time.”

The film was launched last year and if all was well, the filming would have got completed by March-end or beginning of April 2020. But due to the Coronavirus-induced lockdown, the filming was indefinitely delayed. In August, the makers announced that they will resume filming, that too with the scenes of John Abraham and Aditi Rao Hydari, both of whom have special appearances. Interestingly, John and Aditi’s track is set in 1947 with the former playing the younger Kanwaljit Singh and the latter essaying the younger Neena Gupta, as per reports. John plays a sardar and his first look was received warmly. And it’s probably also why the film has been aptly titled Sardar & Grandson, since Arjun Kapoor plays the grandson.

Incidentally, John is also one of the producers of the film along with Bhushan Kumar, Divya Khosla Kumar, Krishan Kumar, Monisha Advani, Madhu Bhojwani and Nikkhil Advani. Once John Abraham and Arjun Kapoor complete Sardar & Grandson, they’ll get a chance to share screen space in Do Villain, directed by Mohit Suri.

Also Read: “It feels great to be back on the sets again,” says Arjun Kapoor after testing COVID-19 negative

Sushant Singh Rajput sent funds for his pet dogs, Amar, Akbar, and Anthony a day before his demise : Bollywood News

Sushant Singh Rajput passed away by suicide on June 14 and his death has been in the news ever since his father filed an FIR against Rhea Chakraborty. The murder angle has been slashed by the CBI for now and they are still probing the case from the suicide angle. With Rhea Chakraborty’s brother being […]

India, as well as the world, is fighting its biggest public health crisis currently. As our lives have come to a stand-still owing to the Covid-19 pandemic, some of the worst hit communities are the daily wage labourers and the homeless ones. Bollywood, with all its capacity, has come forward to help. But fake news […]

Even as festivals are moving virtual, Egypt’s El Gouna Film Festival, to be held between October 23 and October 30, is all set to be amongst the first sizeable physical film events to be held in COVID-era. Interestingly enough, the festival has an interesting Indian connection too. The Shorts Film Competition of the schedule will […]