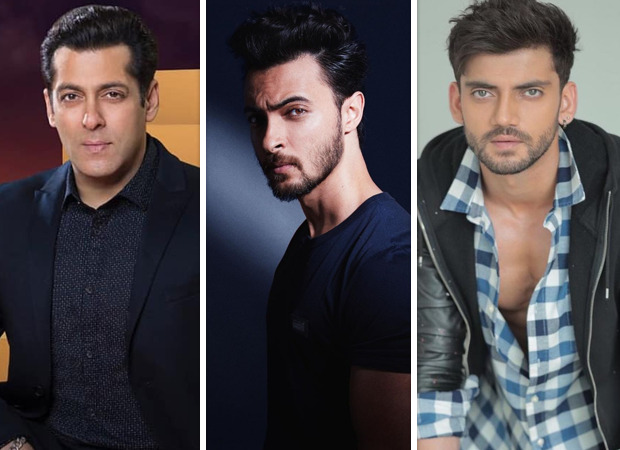 After teaming up with Aayush Sharma in Antim: The Final Truth, Salman Khan reunites with his brother-in-law in Sajid Nadiadwala’s Kabhi Eid Kabhi Diwali, which might soon be renamed as Bhaijaan. The social comedy packed with action is directed by Farhad Samji and it also features another graduate from Salman’s galaxy, Zaheer Iqbal. It has come to our notice that Salman plays an elder brother to Aayush and Zaheer in this much awaited film.

“The premise of Kabhi Eid Kabhi Diwali urf Bhaijaan is a tale of three brothers, with Salman playing the eldest followed by Zaheer and Aayush. The humour stems from the fact that his younger brothers can’t get married because the oldest in the house is yet unmarried,” a source told Bollywood Hungama, adding further that it was Salman’s idea to bring Aayush and Zaheer in this film.

“Salman believes that emotions in reel are real when someone shares a similar bond in real life too. He shares a unique off screen bond with both Aayush and Zaheer, and Sajid too was on the same page with the cast. He agreed to Salman’s point of view of bringing the two youngsters on board the film. The chemistry of three brothers is said to be highlight of the Farhad Samji film,” the source further told us.

Pooja Hegde plays the female lead of Bhaijaan, and it’s her character that brings about a different arc in the tale. “Imagine the relief that younger brothers would get, when eldest in the lot finally finds the love of his life. It’s a tale of comedy padded with drama, romance, action, emotion and self-discovery. Though the title might be changed to Bhaijaan, the core message of the film remains the same – celebrate unity in diversity – and Salman’s character too will remind the audience of the vintage Prem, who always stood for love over hate.”

One of the key reasons to contemplate on retitling the film as Bhaijaan is because Salman indeed plays the character of a “BHAI” in the action comedy.  Kabhi Eid Kabhi Diwali goes on the floors once Salman finishes Yash Raj Films’ Tiger 3 co-starring Katrina Kaif and Emraan Hashmi.

Vikrant Massey has become the latest Bollywood actor to test positive for COVID-19. The actor while informing about the same said that he tested positive despite taking all necessary precautions. Vikrant took to Instagram and wrote, “Despite necessary precautions on shoot, I’ve tested Covid positive…In self quarantine. Requesting all those who’ve come in close contact […]

On the occasion of Tiger Shroff’s birthday today, the makers of Heropanti 2 announced the release date of the film and also unveiled an interesting solo character poster of Tiger Shroff in Heropanti 2. Housefull producer Sajid Nadiadwala’s production house Nadiadwala Grandson Entertainment annoucned that the film will be released on December 3, 2021. “Dropping […]

Sonu Sood’s messianic zeal knows no bounds. After he got to know that a fan from Bihar Armaan was on his way to Mumbai to meet Sonu, cycling all the way, Sonu rushed to the fan’s rescue. And now even as you read this, Armaan is on the way to Mumbai by air. Says Sonu, […]