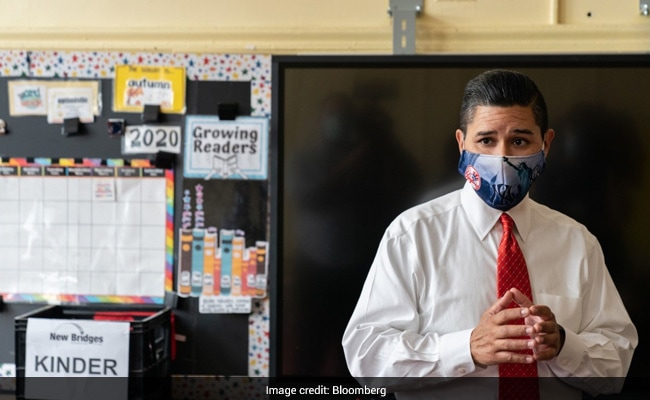 Richard Carranza, chancellor of the New York City Department of Education, speaks at a news conference.

New York City Schools Chancellor Richard Carranza said he will resign in March, clearing the way for the elevation of the system’s first Black female chief.

Carranza, 54, has run the largest system in America for the last three years. He has battled Mayor Bill de Blasio over how to tackle a history of segregation in New York City education and accusations of systemic favoritism in the admissions system for gifted-and-talented programs.

“It is incredibly hard to say goodbye,” Carranza said at a Friday briefing. “I am a New Yorker who has lost 11 family and close childhood friends to this pandemic, and a New Yorker who quite frankly needs to take time to grieve.”

Carranza will be replaced by Bronx Executive Superintendent Meisha Porter, who will take over March 15, de Blasio said at a briefing Friday.

“She will make history,” de Blasio said. “This is a moment of national importance, that an African-American woman will take the helm of the nation’s greatest public school system.”

In the Friday briefing, Porter said she was ready to lead the system toward recovery. “We have come so far since March,” she said. “I promise we’ll do everything to reopen schools.”

Many have remained closed during the pandemic, despite a positive Covid-19 test rate of less than 1%.

Middle schools reopened for in-person instruction this week. About 60,000 students are eligible to return to classes two or three days a week in a hybrid schedule of at-home and in-school lessons. About 70% of middle-school students chose all-remote instruction earlier and will continue to learn at home. All high-school students continue to learn through online instruction. De Blasio said this week that he expects high schools to reopen before the end of the school year.

Porter pledged to focus on addressing the longstanding racial lines within the city’s school system. “The reality is, segregation exists, and I am not going to shy away from the importance of really looking at inequities around admissions processes,” she said.

Carranza had been in the thick of conflict among teachers, parents and politicians as the city searched for a workable policy. United Federation of Teachers President Michael Mulgrew said Carranza was a “real partner.”

“Too often, he had to fight behind the scenes to keep the needs of students, staff and their families ahead of politics,” Carranza said in a statement Friday.

Pakistan President Arif Alvi has promulgated an order to form a caretaker government as well as to conduct elections in Gilgit-Baltistan province, a move strongly opposed by India. The presidential promulgation came days after the Pakistan Supreme Court on April 30 allowed the federal government to amend a 2018 administrative order to conduct general elections […]

LONDON — Britain and the European Union were on a collision course Thursday, after Brussels demanded the speedy withdrawal of proposed Brexit legislation that the government of Prime Minister Boris Johnson has admitted would breach international law. The ultimatum, which Mr. Johnson’s government swiftly rejected, is the most serious crisis yet to hit negotiations on […]

HONOLULU: US Defense Secretary Lloyd Austin said on Saturday he was traveling to Asia to boost military cooperation with American allies and foster “credible deterrence” against China. Austin kicked off via Hawaii, seat of the American military command for the Indo-Pacific region, his first foreign visits as Pentagon chief. “This is all about alliances and […]