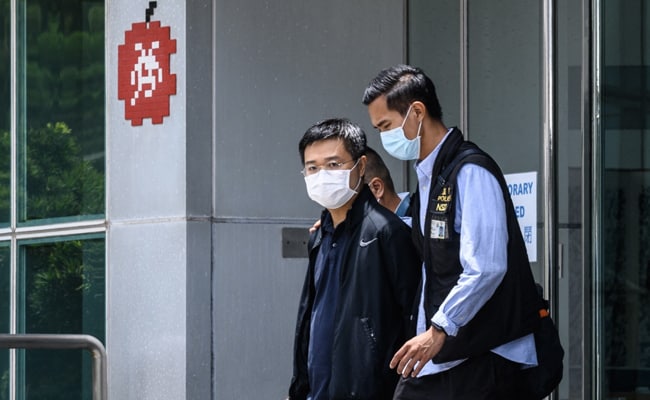 Hong Kong police charged two executives from the pro-democracy Apple Daily newspaper on Friday using a powerful new security law, a day after the company’s newsroom was raided over articles it had published.

Police said a 47-year-old and a 59-year-old were charged with “collusion with a foreign country or with external elements to endanger national security”.

Some 500 officers descended on the paper’s newsroom on Thursday, bundling computers and notepads into evidence bags.

Authorities said the operation was sparked by articles that allegedly appealed for sanctions against China.

It was the first time articles published in Hong Kong have sparked arrests under the new law that cracks down on dissent in the international business and media hub.

Five Apple Daily executives were arrested in the operation.

Police said the remaining three were still in custody and being questioned. The two charged executives would appear in court on Saturday morning.

Over 100 people have been arrested under the new security law which China imposed on Hong Kong nearly a year ago to stamp out dissent in the wake of huge pro-democracy protests.

More than 60 have been charged and the vast majority have been denied bail.

The first vaccines are set to be given to the elderly and vulnerable. (Representational) London: One of the UK’s senior-most medical chiefs has indicated that a vaccine against COVID-19 could be ready to be deployed by the start of the New Year, according to a media report on Sunday. Jonathan Van-Tam, England’s Deputy Chief Medical […]

Fauci Says He Thinks That January Covid Cases Will Get Worse

Dr. Anthony S. Fauci, the top infectious disease expert in the United States, predicted on Thursday that the daily death toll from the coronavirus would continue to rise for weeks to come, and counseled patience with the vaccination program gearing up across the nation. Health officials in the United States reported nearly 4,000 virus-related deaths […]

LONDON — Queen Elizabeth II turned 95 last week, four days after burying her husband, Prince Philip, and with him the partnership that guided Britain’s royal family for nearly 70 years. Now, as the queen faces the future alone, her son and heir, Prince Charles, is reshaping the family to carry on after her. Philip’s […]